We had a great afternoon and evening today with Tammy and Matthias. This was our last visit with Tammy before her move back to the USA early next week. We went to the Dult — it’s kind of a twice-yearly two-week Oktoberfest. Carnival rides, merchants hawking a mix of traditional (among other things, lederhosen outfits for toddlers) and modern (snap-on mobil phone cover kits) wares, and of course food and drink.

Matthias and I were really looking forward to getting a grilled/steamed/smoked trout-on-a-stick. Turns out they don’t serve them on the stick, they just smoke them that way. It was pretty expensive, but there was a lot to be eaten there, so I’d say it was worth it. Here’s Tammy and Matthias with the fish: 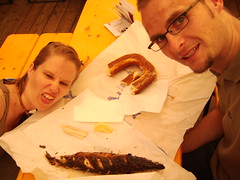 The band was instrumental in getting us into the right mood:

Here’s me, living it up after a couple of liters of beer and beer mixed with lemon/lime soda, while the ladies were off hunting down a WC and Matthias appeared very embarrassed to be sitting in the presence of such vocal genius:

This was a pretty mellow, relaxed dulty afternoon. In the evenings it can get much more rowdy. Here’s a clip from last year, when we went after work, much later in the evening:

For those of you paying close attention, Tammy is in fact female and the title of this post refers to her as “Hr. Doktor Bosler.” That’s an inside joke, referring to how often her name gets screwed up in Germany. That’s one of the (admittedly smaller) benefits of living here for me — no one needs to be told how to pronounce my last name!