This is what I look like before my morning coffee and long after a haircut is overdue.

Our office moved from one office park to another, however, and the new office park doesn’t have a barber shop. So it’s been a while. With the moisture in the air and average daily temperatures so far, I can see a haircut becoming a priority.

MMMMMM, mac & cheeeeeeeeeese. I have lamented the lack of decent cheddar here in Regensburg. I guess the cheese deities heard me, because I finally saw sharp cheddar and decided to take a chance. Cliff is especially glad I did. This stuff was fabulous and takes the edge off of the occasional homesickness.

*The cheese I was able to find was in 100 gram packages of sandwich-sized slices. I used 2 entire packages cut into matchsticks in order to approximate shreds. I don’t know how this compares to amount given in the recipe, but I’m fairly confident that it was at least a little more than 1.5 cups.

#The uncooked pasta part made me nervous, so I parboiled mine, then combined everything in the crockpot. The noodles were a little mushy, but still good.

In a saucepan, combine all dry ingredients. Whisk milk into saucepan until there are no lumps. Over medium heat, continue stirring milk mixture until it thickens and boils. Add cheese a little at at time and stir until melted. Pour pasta and sauce into crockpot and stir until well mixed. Cover and cook on low for 2.5 hours or high for 1 hour.

Sorry about that. It’s been pretty busy at work since coming back from vacation, and I actually haven’t been spending as much time on the computer outside of work (*heavens to Betsy, imagine that!*). Cliff & BookCrossing’s Scott at the
Meet-up in Frankfurt
Photo credit:Leseschaf

Traveled, almost on a whim, 4 hours to Frankfurt to meet up with many BookCrossers from lots of different countries. Well worth the trip. Met many new BCers and was quite pleased to meet ones from my trip to Cologne in December 2003 again, and was especially pleased to finally get to meet GirlFromIpanema, who waited around extra for me to arrive and sent me my first book from Germany back in…2002.

– We used up some left-over marmalade in the form of cookies. The majority of them were distributed at work to great success. Kerstin and I thought they were a little oddly bitter, while Nadine and Andy thought that was what made them so unusually tasty. Either way, I want to hang onto that batter recipe (without the orange peel…but then what should I sub in?) because it makes cookies that remind me of Pecan Sandies.

Observed some pretty weird weather. It’s been really hot, muggy, sticky, cool, and breezy all at the same time. That’s pretty typical for May around here(Aside: I remember being holed up in the 5th story of our old office building the first May I spent in Regensburg wondering if I’d need to find one of those tornado-drill spaces in our building…and then very quickly, it was all over and the only evidence of severe weather were all those tree pieces clogging the drains and the rivers the roads had turned into as a result.) I got out my tripod and attempted to capture some interesting cloudy cityscape. I mostly failed, but I did manage to capture some lightning in the distance, using the Night Scene settings on my camera, and got a couple of eerie coloring shots while playing with that. Then besides the occasional lightning and distant rumble of thunder, I heard and saw much closer and smaller and more colorful explosions and remembered that this was the last weekend of the Dult (see this post for details), and on that Friday, they do the closing fireworks ritual. So I snapped a couple of fireworks shots to boot.

We found this recipe over at recipezaar, but it didn’t appear to be complete, so we had to make parts of it up alone. Turned out great! These are nice for people with egg allergies, since there is not a single egg in these cookies. Of course, there are plenty of wheat and almonds, so watch out for those.

3. Sift the dry ingredients together and then combine thoroughly with the other mixture.

Ah, *mais non* — our trip has come to an end and we are safely back home in Regensburg. *Quelle dommage.*

Today we spent all day getting back from Rémuzat to Regensburg. We hit the road just after 7:00, made it to the airport by 10:30, checked in our rental car (thank goodness that was not an ordeal), had a smooth flight, and even managed to catch the most advantageous train departing from Freising (we almost always just miss it and have to wait around the train station for the better part of an hour).

Yesterday, our last day in Provence, was the best weather we’d had yet and we took full advantage of it driving around on some new roads and some old ones. Check out the pictures.

What vacation in a foreign country could be complete without a shopping expedition? Sarah and I left early this morning for the city of L’Isle-sur-la-Sorgue (notice how the city is like a big blob in the middle of the river via the map). It’s famous for its city-wide market on Sunday mornings. Supposedly the name of the game is “Brocante” (flea market!), but we saw everything from groceries to handicrafts to pottery and cheapo import crap. We picked up many lovely items — mostly not even for us — *sans* cheapo import crap. We hope the presents survive the airline transport back to Germany and then shipping to the U.S. from there. They are somewhat fragile (no, not a fancy Italian lamp). And then Nala was there waiting for us in the driveway when we got back.

Yesterday was a good one. First we headed down to the Pont du Gard and snapped these pictures: 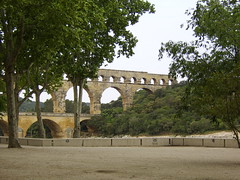 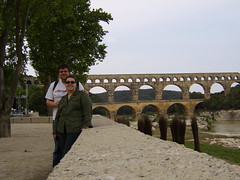 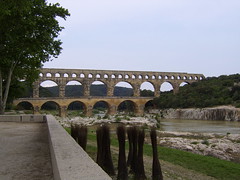 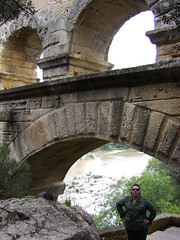 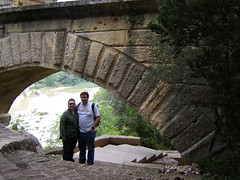 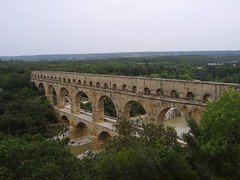 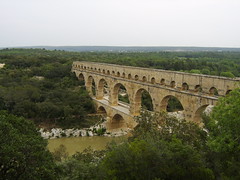 And then we headed in the same general direction further to the Roman Empire town of Nîmes. See that oval in the center of the map? That’s the arena. They offered a nice self-guided audio tour with plenty of gladiator details and really let you climb around up on the highest levels of the arena seating. 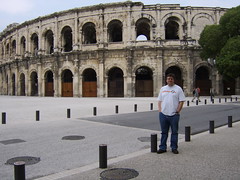 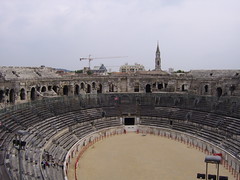 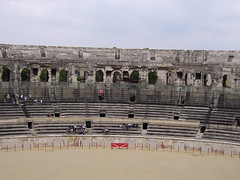 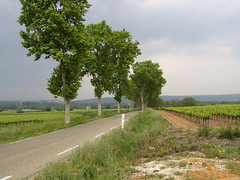 Then we headed back to Rémuzat. We’d been marveling on all our little road trips about the tree-lined avenues separating the fields, so Sarah snapped this one (at left). We came back for dinner with our hosts, who recommended a charming little place called La Charette Bleue. Getting ready early this morning for a trip down to Isle-sur-la-Sorgue, I noticed the first potential for some sunny weather since we arrived.

Today we got off to a slow start, but I think it worked out for the best. Sarah as the Navigatrix worked out a fabulous drive for us through several sub-regions of Provence. We were fighting the weather most of the way, but the clouds made the winding mountaintop roads all the more impressive. We snapped these photos. Trust us; the views were breath-taking. I just wish we’d had a little bit of sun to bring out the full effect of these valleys and mountain passes.

Here’s the route we took on our travels across Provence today: Google map

We went to the Market in Nyons today — it was quite a show. Unfortunately the rain was insistent and we got pretty wet (despite the travel umbrella from Carolyn and Max). Best thing to do in that situation: take shelter in a cafe and dry out and warm up (which we did). But not before snapping these pictures around the town:

Then after that, we departed for Gap, where we paid *way* more than we should have for lunch (this was *not* a repeat of the taxi situation with the Malge and Rach back in April, 2006) and strolled around town, snapping these.

After a very nice (and well-deserved, I might add) sleep last night, we had a nice breakfast of bread and croissants with homemade preserves and tromped off on foot to the village of Remuzat. It was rather chilly today, and we even got caught in the rain. However, we could still see how cute the place is, nestled between mountains on all sides.