Another lucky day, weatherwise. Even better than yesterday, actually, because there was a lot of sun. 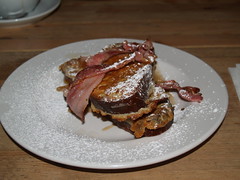 We got up much later than expected, probably because the shutters in the bedroom block out all the light. When we got rolling, I was pretty hungry (like I am, in the morning, especially on vacation), so we stopped in at the Urban Angel because it was on the way and looked cute. Good choice. We each had the French Toast and bacon. I was surprised to see the bacon had also been dusted with powdered sugar. I thought that was a little weird, but it tasted OK.

From there we decided we needed to take advantage of the weather to stroll the Royal Mile. Looks like that was well-played, too — tomorrow’s forecast is very rainy. When we got to the end of it, we noticed we’d happened upon Holyrood House, and since its owners weren’t home, we decided to take a tour. I scoffed at the £10 admission but I have to admit it was well worth it. For an extra £4 a piece we also got admission to the Queen’s Gallery, currently showing chilling photographs from two disastrous British expeditions to the South pole. Also well worth it. 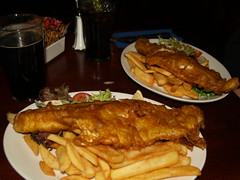 After that, we were I was beginning to get hungry again, so we stopped in at the World’s End for a chippy. Needless to say, that left us feeling pretty full, which was the best time to go grocery shopping. Apparently, clementine season is already in full swing here. Are they on sale already in Germany, too? Hope so.

After that, we were tired from pounding the pavement and hauling the groceries around, and it was already well and truly dark (we’re pretty far North), so we just decided to stay and watch local TV to soak up some more of that accent. Here are the rest of the pictures from today, in slideshow format for your viewing pleasure: