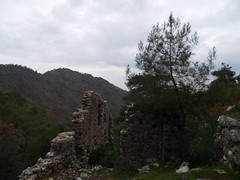 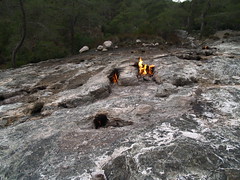 On Christmas Day we rented a car right at the resort (filling the tank up was bad idea — that cost almost twice as the rental contract itself!) and set off down the coast to the West and South from our resort in search of the Chimera. We can’t thank our Frommer’s Turkey 2008 author enough — her instructions were right on the money.

After about three hours in windy, hilly, sometimes scary traffic conditions straight through Antalya and out the other side, we finally made it to the mountainside turn-off described in the book. We pressed on faithfully, even as the road stopped being a real road and we were sure we were lost among roadside chickens and the odd ramshackle “pansiyon.” And we got to the Chimera “base camp.” There a friendly old man pointed enthusiastically at pictures on postcards when Sarah mentioned the Turkish name for the phenomenon of the eternal flames on the mountainside: Yanartaş.

The hike up the hill was only 1000m and was well marked — you can’t miss it. We managed to not get rained on, though you can probably tell by the pictures that it was threatening to the whole time.

After making our way back down the path to the car, we decided to scout out some dining options. But it was getting late and long since dark and we opted for a stop to the Migros supermarket in Kemer for a snack of potato chips (an American brand…so, so much better than what we can get in Germany) and an old favorite, Fanta Limón. Why did they never introduce Ruffles in Germany and why the heck did they stop distributing Fanta Limón?

We made it back in time for a light, healthy dinner at the resort. The road traffic in Antalya reminds me a lot of what I’ve seen in Puerto Vallarta and Iaşi: lanes are extremely optional and horn taps and high-beam flashes are friendly, helpful measures — not the deadly serious insults we’re used to in the U.S. and Germany.

Still, I’m glad the tour bus driver is handling the rest of our surface travel.