I’ve been collecting frequent flyer miles. I just got back today from my very first business trip back to the continent of my birth. I didn’t visit Canada at all on this trip, but since Detroit is north of Canada (check it on the map!), I consider it covered. 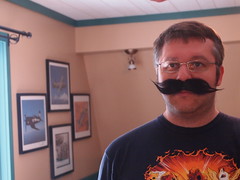 First destination was Guadalajara, Mexico (where I picked up some swell mustaches in anticipation of Mexican Independence Day festivities). I’ve been to Puerto Vallarta many times (as faithful readers know), but this was my first trip to the capital of the state of Jalisco. I stayed at the Hotel Presidente Intercontinental, which was very nice. My company’s corporate rate there seemed very reasonable, considering the amenities, generous room, location, friendly staff, and the outstanding breakfast buffet. I can’t say “¡no!” to chilaquiles rojos o verdes and frijoles fritos for breakfast. Ever. I found my colleagues in Guadalajara to be charmingly energetic, engaging, and — above all — alarmingly young. My host took me out on my last night for dinner, and I requested a restaurante típico of the city. We tried a place he recommended for pozole, but they were closed. So, we scooted over to Las Vías for a couple of tortas cubanas y aguas frescas — my jamaica was excellent. I’m hard-pressed to find a website for Las Vías, but I’d like to throw more business their way. Our sandwiches and drinks were cheap and delicious.

Next stop was Chicago, where Yelli graciously picked me up from the airport and showed me how Chicagolanders eat not once, but twice while I was there for two days. (It’s really good to have friends spread around the world.) I am so pleased to have caught up with her (and to have been the excuse she needed to drop her kids with their grandparents), but I would have liked to have seen them and her husband, too (particularly to see the mustache effect on their elder son). On the first night, she took me to Portillo’s to get a true Chicago diner experience. After a long second day at the office, she picked me up again and I sampled Chicago-style deep-dish pizza. Note to Detroiters: it was like Pizza Papalis, but better, in terms of crust and cheese. 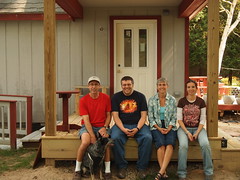 After a full work week, I landed in Detroit, where my sister scooped me up at the airport. We rendezvous’d with my parents, ate dinner with my grandparents, and headed up to the house on the lake for the remainder of the weekend. It was nice to get sort of a spontaneous visit with my family, but I really wish I’d had Sarah with me. It generally feels weird traveling without her, but even more so in places where we’ve lived or at least visited together. I got the chance to meet up with some old work colleagues, dear old Michigan friends, and recent transplants from Regensburg to the Detroit area outside of my work commitments.

Writing it up in restrospect, after arriving today (according to my Michigan-based bodily clock, but that was actually yesterday according to local time), it doesn’t seem quite so intense. Visiting three offices over a span of 10 days doesn’t sound like much now, but I can assure you — it took a lot out of me. Still, I’m so pleased everything worked out as well as it did.

P.S. — My thanks go to joolsstone over at trainsonthebrain.com for the inspiration to use tripline.net for this nifty animated mapping thing. The Indiana Jones theme plays through my head when I watch this.

* — NAFTA stands for “North American Free Trade Agreement.” It’s shorthand, for my company, for our U.S./Canadian/Mexican locations. Does anyone else call it that? I wonder if German companies are more likely to use a term like that, since they can compress all that meaning down to just two syllables this way.