We started this road trip with a drive down from Regensburg to Mantua. This is the next installment.

After resting up at our B&B in Mantua and spending some time walking around after having driven the whole previous day, we packed up our stuff and got back in the car for another two and a half hours. On paper. It felt a lot longer than that for several reasons:

That last one really stuck it to us as we approached the Florence suburb of Fiesole. Viale Beato Angelico, ﻿Via Beato Angelico, Via Angelico, some jumble of Via-Delle-Beato-Angel-something or another, and Via Doccia. Via Doccia is the only one you can use to reliably arrive at Villa Fiesole. And they don’t show you that on their booking.com page or even their own webpage optimized for mobile devices (wha?). It’s only when you view it with a computer that they give you the address you can use to actually arrive. 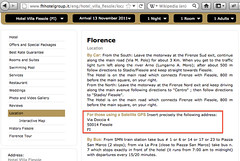 But, after all the frustration of tooling up and down the mountainside, consulting our GPS, Google Maps (mobile roaming, argh!), and intuition, we finally arrived, checked in and decided to eat in the hotel restaurant. The food was pretty good, but the best part was the cheese course at the end of the meal. If you get antipasti, primi, secondi, and then some dolci or a cheese sampler together with a bottle of wine at every meal, then you’re going to get full and broke pretty quickly. 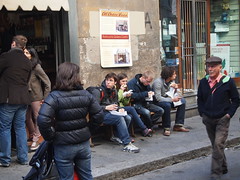 Fortunately, we stopped doing that almost right away. You will save a lot of money if you get lunch from a sandwich shop, like these guys. Our Frommer’s Italy book steered us to I Due Fratellini and we were quite pleased with the quality of sandwiches coming out of this lunch counter not really even big enough for two workers. 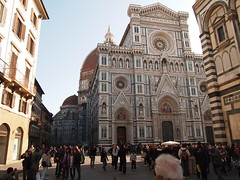 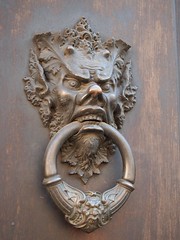 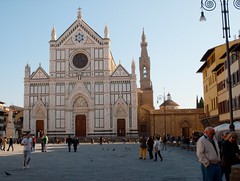 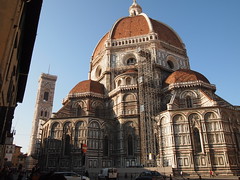 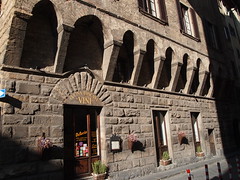 That last one there was a nice place to stop in for a sit-down lunch after tromping around outside all morning admiring the architecture of Florence’s Cathedral, other churches, and nifty doorknobs. Because sometimes the sandwich-on-the-street-style just doesn’t cut it, either. 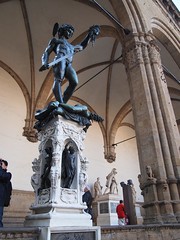 We took the opportunity, while in the leading city of Renaissance art, to visit the Uffizi. I can handle about two hours of serious art and the crowds there to experience it. I appreciate, as much as the next guy, I suppose, the ancient Greek and Roman mythological and political figures, and their fans in the Renaissance period. But dang! In my swordplay/wrestling matches with mythical creatures, I always wear pants.