This is the third installment of our road trip through northern and central Italy. Check out Part One and Part Two if you’ve missed them. 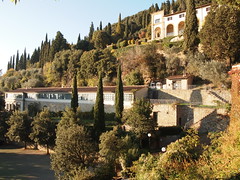 On our last day in Florence at the Villa Fiesole (after feeling confident we could find the hotel again, and at night if necessary), we ventured out to Lucca. Our Frommer’s Italy guide recommended it because it’s mostly overlooked by tourists (especially in mid-November) but is famous for olive oil production in the region and its intact city wall.

Our first discovery was a group of old men playing a board game in a park on top of the city wall. Venturing into the city a little deeper in search of lunch, we found some beautiful churches and a surprisingly familiar cultural icon in the form of a clothing store. 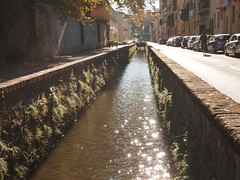 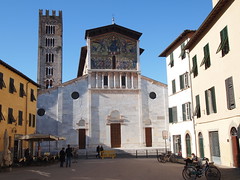 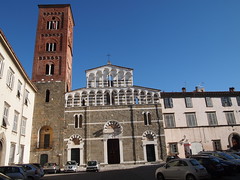 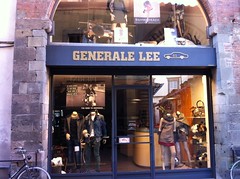 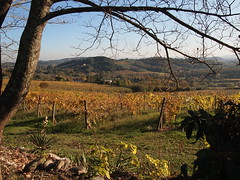 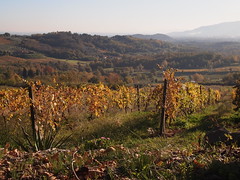 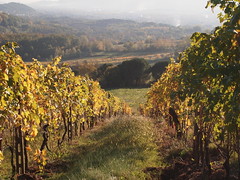 Then, as our 3 hours of parking was due to expire, we got back in the car in search of the Fattoria Maionchi, since our Frommer’s book listed them for olive oil and wine. Well, we certainly found the vineyards (the olive groves appeared to be all around the Fattoria grounds, but not actually on them). But at first glance, the place seemed abandoned — not a soul to be found. Eventually a cute couple came out of the farm house to see why were poking around, and we all chuckled sheepishly as we discovered we had no languages in common. We hauled out the Frommer’s and pointed to the reference and in a flash of brilliance, Sarah said “comprare olio, per favore” at which they nodded and smiled and said “ah, cinque minuti” as they dialed Giuseppina on their phone. While we were waiting, I snapped these shots of the vineyard.

Then Giuseppina the olive oil lady drove up from somewhere else, unlocked the storeroom, happily sold us some oil, locked up the shop again and drove off. I guess we confused them all by seeking out olive oil after the wine season was pretty much over, but it was smiles all around the whole time.