Continuing in our series of KitchenAid glory basking, this weekend we thawed out some of our pumpkin puree (most often used in pies), and equipped with all the right stuff (thanks Cheryl!), we made a batch of pumpkin ice cream and tried our hand at fettucine.

We wanted to stick to the recipes in the ice cream maker’s instructions, but quickly discovered (remembered?) that Germany’s dairy products hierarchy don’t match up to the U.S. or British ones. If we can get Light, Heavy, Single or Double cream here in Germany, we haven’t yet found where. Thus we are limited to recipes requiring Whipping Cream (or Half-and-Half, which we can simulate through a conversion Sarah found online).

So Sarah dug up this one, requiring only whipping cream. It’s kind of hard to pour ice cream batter into the freeze bowl with the moving dasher WITHOUT glooping over the side of the bowl a little. 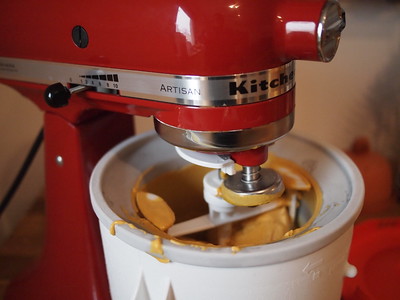 Fresh out of the freeze bowl after about 20 minutes of dashing, it had a lovely soft-serve-like consistency. 6 hours later at pal Matt’s house, it had the firmer texture — better for scooping — I prefer. The flavor was outstanding — this is what I want my pumpkin pies to taste like, except it was ice cream. Therefore: make and freeze enough pumpkin puree so that you can get your pumpkinny dessert on in the summer, when you can’t be bothered to turn on the oven.

We often skip steps in recipes calling for mesh straining, but it was a good idea in this case, to make sure no accidental egg bits (though I think we tempered the eggs better this time than in earlier attempts) or spice chunks from the custard made their way into the final product. 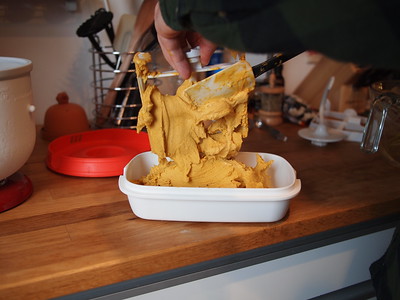 Having finished off that batch of goodness, it was time for us to tackle our first semolina pasta. Sarah acquired our primary ingredient from the local fancy market (Sarik, am Kassiansplatz, if you know your way around Regensburg’s Altstadt). 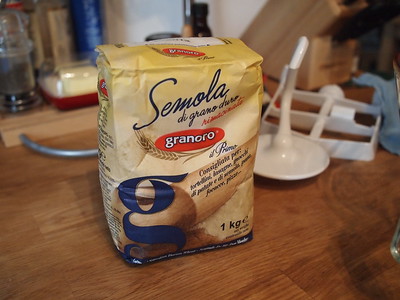 The standard recipe included with our pasta-making attachments was surprisingly easy. Basically: throw eggs, oil, water, flour and salt into the mixer bowl and mix for 30 seconds with the paddle on the lowest speed setting. 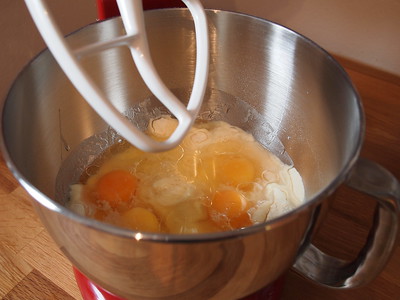 Switch out the paddle for the kneading hook and let it knead for 2 minutes for you on the lowest speed setting. Our mixer struggled a bit at times; I think the lowest speed is a little too low for that mass of dough. 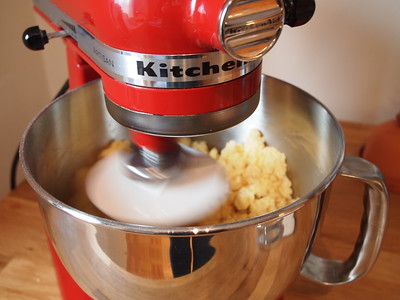 Then knead by hand a few minutes. 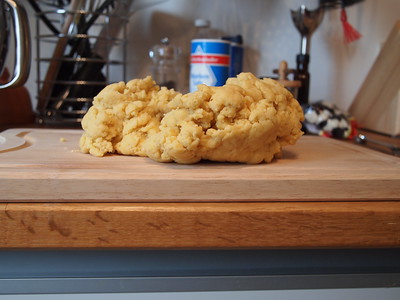 Next, cut your kneaded dough ball into more manageable pieces. The instructions say 8 lumps, which made for some pretty long flat sheets of noodles. 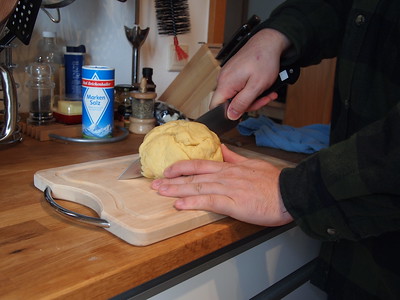 16 lumps (on a spaghetti attempt the same day) made for shorter sheets, which were much easier to handle, but shorter noodles after running through the cutter. 12 lumps is probably the ideal compromise between flat sheet handle-ability and noodle length. We’ll try that on the next batch. 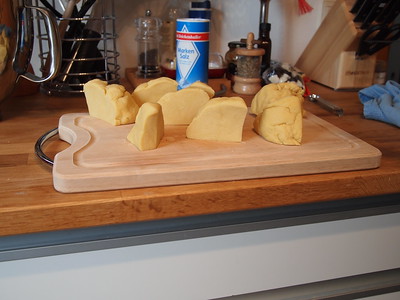 Sarah was really smart and laid out an old (clean, of course!) towel right at the start on our table. On that surface we can sprinkle flour and clean up the mess quickly.

The instructions (included with the attachments and in tutorial videos on the web) suggest sprinkling with flour between the flattening and cutting stages to prevent sticking, but we didn’t need to do that at all. If you’re going to cut them by hand (say, for your pappardelle), it’s probably a good idea to sprinkle the sheets with flour so you can roll and cut them without sticking. 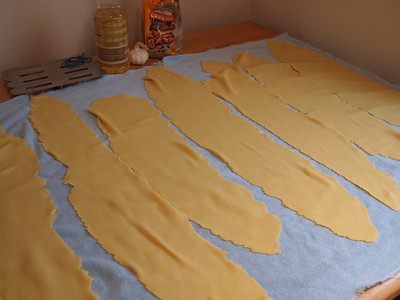 We did sprinkle the cut noodles with flour to keep them from sticking while in storage. 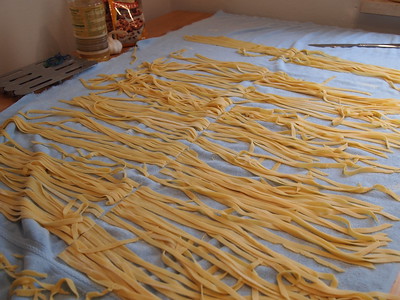 The big test was the same evening at Matt’s place, where he whipped up a decadent gorgonzola-mozzarella-pancetta-rocket sauce. Our noodles behaved admirably: no sticking, clumping, or tangling. 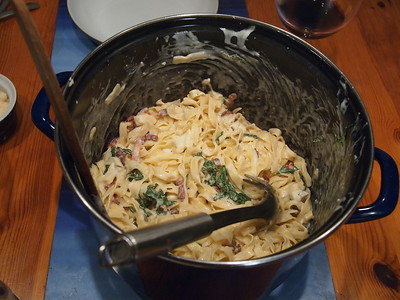 Can’t wait to get that batch of spaghetti out of the freezer and give them a whirl, too…