Privacy & Cookies: This site uses cookies. By continuing to use this website, you agree to their use.
To find out more, including how to control cookies, see here: Cookie Policy
In February 2012, we flew to Hong Kong for about a week. This was our first (non-business) trip to Asia. You can read Part 1, Part 2, and Part 3 to catch up. Hong Kong is a shopper’s paradise. Produce, seafood, meat (including meat that is still clucking and quacking), electronics, knock-offs, fancy boutique stuff, touristy trinkets, you name it, and someone will be willing to haggle with you for it.

Wikipedia informs us that a wet market is a traditional market for produce, meat and fish in which the emphasis is on freshness. Therefore, a lot of water is used to keep products fresh, and ostensibly clean. Despite having a guidebook and the quite substantial size of the market area in Wan Chai, we had a hard time finding this place, and were about to give up and head back to our hotel when we stumbled upon it. Lots of meats and produce to peruse here.

We started out looking for “Island Beverly”, but gave up (even though it’s supposed to be easy to find). Instead we found “Windsor House.” This was a different take on a shopping mall — it was 16 stories high, but maybe a sixteenth of the horizontal surface we’d normally associate with a mall. This seems fairly representative of Hong Kong, given that they’ve essentially crammed the Boston metro area’s population into an area with a tenth of the surface area. In Windsor House there are two floors (currently one of them is under construction and off-limits) dedicated to electronics. There were some big brand names and/or product lines well-represented there:

… and lots more. There are plenty of shops outside of Windsor House as well. I was on a mission to buy a new portable external hard drive, and I had certain specs in mind: 1TB capacity, USB 3.0, 2.5″ form factor. Prices didn’t vary wildly, but they did some, so I gave the friendliest shopkeeper the chance to undercut the cheapest shop — which he gladly took. I found the pricing to be cheaper than at amazon.de, but not drastically so, and that makes me wonder if I should have haggled more, or come prepared for buying more stuff to leverage my total price down. I used the same approach with some photo gear in a couple of camera shops just outside the Causeway Bay MTR stop: give them a chance to compete against each other and then go with the best combination of cheap and friendly.

We had fun perusing here, but were very, very careful not to show any interest whatsoever in the obvious knock-off clothing and accessories, knowing that those would quite well get us into trouble upon return to the E.U. The browsing itself was the best part. This night market must be well-known among tourists (indeed, our Frommer’s guide pointed us there) because there were quite a lot of our lot out for a stroll among the hawkers. A small stand offering laser pointers attracted me, and I was ready to plunk down for a green one (c’mon, everyone and their cousin has a red one already) when my expert haggler wife stepped and dropped the price by 30% just by asking for it. And man, that thing is powerful. Can’t wait to show it off in my next meeting.

There was also plenty of street food available, and locals enjoying it. That might have been a bit beyond our adventurous eating threshold, but we enjoyed observing it nonetheless.

The vast majority of what was available in most department stores were high-end international brands, i.e. Burberry, Gucci, Prada, et cetera. But we did find a couple of special and unusual places. Chinese Arts & Crafts is chiefly art, traditional garments (padded jackets, cheongsams and the like) and collectibles, but with the guarantee that they are made in China with traditional methods. A nice place for careful souvenir shopping. Unfortunately, we were exhausted and carrying backpacks, killing time until we could go to the airport, so upscale shopping wasn’t a good fit.

Shanghai Tang is a small department store selling men’s, women’s and children’s clothes, jewelry, handbags, accessories, fabric and home decor. Also somewhat upscale, the offerings in this store were entirely unique and the staff very friendly and helpful. It’s a decidedly chic, boutique type of department store and you stand a good chance of coming away with something modern yet deeply Chinese in style.

Maybe every trendy English-language destination needs to have a district called “Soho” or some variation thereof. Hong Kong’s SoHo seems to be the yuppy hang-out, with much more diversity of bars and restaurants than elsewhere. We found little boutiquey shops, vegan(-friendly) lunch counters, and coffee bars as we rode the escalators from Central up the side of the mountain.

The higher up you go, the less Chinese you’ll find, until the last escalator, at which point you’re in luxury apartment land. About half way up, there’s a mosque and some enthusiastic greeters outside it, really trying hard to entice the tourists to come in for a look around. And just past the mosque greeters, a guy representing a Christian church (honestly I’ve forgotten which variety) was also handing out leaflets and trying his luck.

The walk down wasn’t as easy as we’d thought, despite being fully paved and populated — it’s quite steep, and I would not have liked to do that in the rain. We broke up the knee-flexing stomp down the hill with shopping intervals and lunch at Café O and enjoyed their free WiFi.

This was a fun diversion. The Mong Kok Flower Market is a district of 3-4 blocks of nothing but flower shops. The incredible abundance of flowers and diversity of arrangements led to some sensory overload. Of course, we were there the day before Valentine’s Day, so the stock and displays might have been kicked into high gear.

The ifc (I hate that it appears to have branded itself with lower-case letters) is a huge part of Hong Kong’s Central district. It’s got pedestrian bridges to the Central Piers. It’s got direct access to the Central MTR station (and the Airport Express stop). Not to mention its skyscrapers and Four Seasons hotel. And then there’s the Mall. I didn’t recognize most of the nameplates we saw there, but Sarah did: very upscale international brands. My favorite aspect: the bathrooms were nice (and convenient). If you’re into the high-class browsing scene, this is your place.

I much prefer the street-level shopping to the fancy mall boutiquey stuff. Every day on our way into the city, we rode along some portion of Des Voeux Rd, proudly and officially nicknamed “Dried Seafood St.” Shop upon shop with large, transparent, cylindrical storage containers filled to the top with…you guessed it: dried seafood products. Sarah even spotted a sign for Fish Lip Jerky.

Personalized Chopsticks Guy in the mall at the Peak

On Victoria Peak, while killing some time, waiting for the sun to come and give us a brilliant view of the harbor area between Hong Kong and Kowloon, we ducked into a mall. We found a little shop with a wide selection of chopsticks, and smiling older gentlemen who personalizes them for you in Western and Chinese characters. It was a great souvenir idea — inexpensive but very personalized. 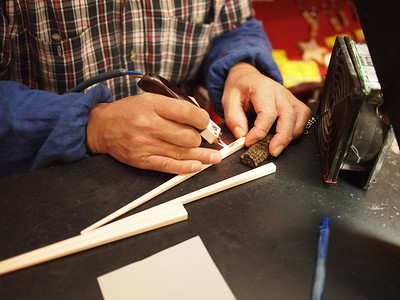