I’ve been feeling crêpey all spring. I scouted out a cast iron crêpes pan (this one, specifically), trying to get a nice, wide flat surface, but one that will still fit in our kitchen cabinets and on our little European stove. I specifically wanted cast iron (which effectively means I’ll never be able to clean it) so I can use a metal spatula (a long, skinny offset one you’d use to spread frosting on a cake) to maneuver my crêpes without tearing up the ptfe coating. Alas, I fear I won’t ever be able to make crêpes in the proportion of those guys at carnivals, but what I’ve been able to produce has been very tasty, and didn’t require more than a little practice.

Let’s start with the batter. I pretty much wholesale mooched this one from the Food Network.

Nothing exotic here — just stuff you’re likely to have on hand anyway. The original recipe called for some lemon zest, and I made it with that the first time, and it was yummy. But I’m sure I won’t need that in my basic crêpes recipe. I’m sure I’ll throw it back in when I’m doing blueberry crêpes or some other flavor which benefits from lemon zing.

Anyway, mix the dry ingredients. Start heating the pan (we use setting 2 of 9 on our stove and that’s plenty). Whisk the wets together, and then whisk them slowly into the dries. Get all the lumps out (if you’re using a Kitchen Aid mixer, you’ll know that the whisk attachment will leave some dry stuff at the bottom unless you swirl it up by hand at least once). 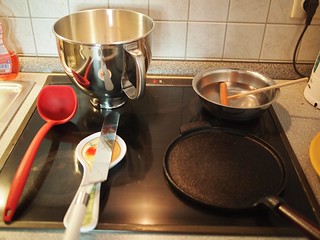 Get all your stuff ready. It’s important to have it all within easy reach. When your pan is hot, drop a pat of butter onto the pan and smear it around. Then immediately dump a ladlefull onto the center of the pan and spread it around as thinly as possible. I recommend one of those cheapo wooden T-bar thingies; I’ve tried without (gravity, other spatulas) and nothing worked as well as that.

Let it sit in the pan for about a minute; when you start to smell a burnt smell, slide your spatula in and all the way across under the crêpe, freeing it from the pan. It should be pretty easy to separate. If you encounter resistance, it’s too early to flip.

Flip the crêpe (try to get it in back into the pan — mostly at least) and then you’ll only need to cook it another 45 seconds at most. Same deal with the flipping. It doesn’t need to have any browning on it at all; you only need it to be cooked enough as to be dry.