In our continuing quest to make more food ourselves where feasible (and fun!), I bought a(nother) pasta making attachment for our KitchenAid mixer on eBay earlier this month. This one extrudes dough into tube shapes![audio:http://cdn.regensblog.com/wp-content/uploads/2013/01/Series_of_Tubes_-_Senator_Ted_Stevens.mp3] Here are some of my impressions:

Our “large macaroni,” as KitchenAid calls them, cooked 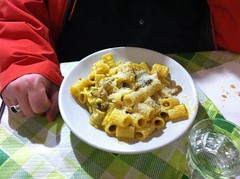 quickly and easily and were quite tasty in Sarah’s Amatriciana sauce. I am looking forward to making our own elbow (“small”) macaroni, fusilli, and rigatoni in the near future, especially after some great pasta in Rome last weekend. Details on that are forthcoming!

7 thoughts on “Homemade Pasta — a series of tubes!”