A perfect record is pretty difficult to sustain. Even my favorite airline for business trips to Romania let me down pretty hard last week. A trip with eight hours of planned travel ballooned into 19 hours, thanks to Carpatair.

Not all of the travel time was their responsibility, of course. It takes a solid hour and a half to get to the airport from our apartment. Figure on twenty minutes from the airport in Iași to the office or hotel. But I’m chalking the other 17 hours — instead of 6 — up to them.

I was supposed to depart Munich at 09:30 and, after a brief layover in Timișoara, arrive in Iași at 14:40. Check-in, boarding and taxiing all seemed to go as planned. The first indication that something was going to be different about this trip was during the take-off: suddenly the engines throttled down and we veered off the main runway, rolling to a stop out the flow of air traffic. The pilot told us there was a routine technical concern, nothing for us to worry about, but that some tests would be required before he could decide whether the flight could proceed as planned or not.

Turns out not. He canceled the flight. We re-entered Germany, and claimed our bags. The baggage claim representative of aerogate — Carpatair’s contractor at Munich Airport — instructed us to head to their ticket window in the departures section for further information. Chaos awaited us there. Three squawking women sharing a single telephone and trying to answer questions from and instruct a planeful of dismayed passengers — at least partially German passengers, which means we were not queueing patiently and orderly, but rather trying to surreptitiously climb onto the shoulders of the next guy (or outflank him) without being noticed, while glaring at and muttering about the dude flanking us or breathing down our neck.

They seemed incapable of answering questions coherently — like “How will I get to my destination? Who will give me the boarding pass? When will I arrive?” I heard a rumor while standing in line that the transportation for the last leg of the trip would be via ground. But all these aerogate ladies would tell was “Lufthansa” (in answer to “Who will give me the boarding pass?” and “tonight” (“When will I arrive?”).

I made my way across the airport to the other terminal, tired and frustrated, and a kind Lufthansa ticket agent confirmed that I was rebooked on one of their flights to Bucharest, but nothing beyond that. I told her that my destination was Iași. She called aerogate and they confirmed to her that I would arrive in Iași via ground transportation, but not when that would be. I shrugged and decided to go with it, knowing I did not want to face the company travel department with unplanned flight costs for reimbursement.

I still had more than a handful of hours to kill at Munich airport. I figured it couldn’t hurt to put some maps on my phone for offline use to track my progress across the country if I get bored on the way up from Bucharest. That was a prescient move on my part.

When we landed in Bucharest passengers for Craiova, Bacău, and Iași were separated off from the rest of the passengers. It was then that I found out that I was the only person headed for Iași on a van full of passengers to Bacău. I found out later — much later — that that is not such an unusual route. There are a few routes from Bucharest to Iași, and the one with the best roads goes through Bacău. But it was two additional hours beyond the other passengers’ destination at night, in the fog.

And along the way I found out our driver had never been to Bacău, or Iași. And didn’t speak any of my languages. And didn’t know the route. And didn’t have any maps with him. I got all this from the lone Romanian speaker in the vehicle (a passenger to Bacău). The other guys all wanted to stop for dinner after a few hours on the road, but I managed to convince them to press on. I had packed a box of granola bars and sacrificed them as bribes to the other passengers so we would not have to stop for dinner.

A few times I noticed, after entering a roundabout, that we weren’t heading the direction I thought we should be. I fired up Google Maps and showed the Romanian speaker (until he got out, with the rest of them, in Bacău) that we were obviously heading away from our destination. When I was the last remaining passenger, I notified the driver directly, pointing and gesturing.

He didn’t always believe me. A couple times, leaving Bacău and entering downtown Iași, he paid a local taxi driver to let us trail behind in the right direction. Eventually, just before 2am, 20 hours after awaking the day before, I mumbled “mulțumesc” and stumbled my way, groggy, stiff and sore, into the Unirea without looking back.

Three morals of the story, I guess: 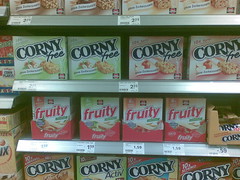 5 thoughts on “Be prepared: granola bars and Google Maps save the day”