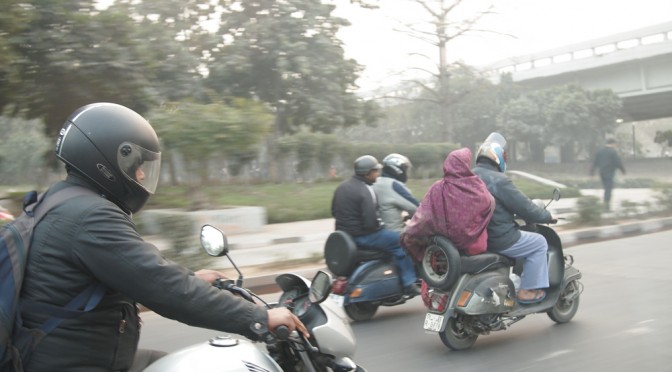 We flew to India on a package tour in January 2014. It was our first time in that country; we hope it won’t be our last. This is Part 1 of the story.

Stepping off the plane in Delhi, we were a little disoriented by the overnight flight and 5.5 hour timezone difference between Indian Stretchable Time (as we were to learn some call it in jest) and CEST. Fortunately our travel agency’s rep was there right when he said he’d be, with our names on a sign just past customs, waiting for us.

We got into our ride for the week — part of the package — and groggily arrived at the hotel in Mayur Vihar, attempting to acclimate our bodily clocks. We immediately noticed

Feeling like there was no time to lose, we took a nap in the hotel but then called up our driver Parveen to ask him to take us to Connaught Place for a stroll around town. His job was to make sure we didn’t go anywhere we shouldn’t. He suggested a stop a the Swaminarayan Akshardham, a very recently constructed Hindu temple. No photography at all is allowed there — in fact there are massive queues for the security checkpoint and lockers for stashing inbound visitors’ stuff. Completed in 2005, the entire complex had an odd feeling about it: it was obviously worthy of reknown on the scale of a world heritage site, but so modern and therefore very accessible, with inscriptions in modern English as well as Hindi.

After a couple hours discovering and admiring the details in the sculpture all around the grounds, Parveen brought us to Connaught Place. He let us lead as we explored on foot, entering the underground Palika Bazaar for a look-see. Eventually, he took us to our chosen place for dinner: Pind Balluchi.

The next day, bright and early, Parveen took us to meet our guide for the Delhi segment of the trip. Her name was Poonam, and she loved to TELL US THINGS. We really enjoyed the personal perspective she provided, as we heard about her family’s housekeeper/cook, being of Pakistani descent in Mumbai before moving to Delhi, her arranged marriage, her sons and their careers, her sister-in-law’s German brother who comes to visit periodically but won’t eat anything but butter. Combining all of that with what she was SUPPOSED to tell us — geography, history, culture, demographics made for very pleasant infotainment.

After that was a visit to the Qutb Complex, celebrating a Mughal victory over the locals. Day Two started off with a stop at Delhi’s largest mosque:

And a rickshaw ride through the downtowniest part of Old Delhi, where we found a lot of things happening out in the street. Haircuts, bathing, bicycle-power knife-sharpening, you name it:

There was a lot going on there in the streets, and I would have preferred we simply walk the loop through the streets back around to the mosque where our trip started to get more than just a fleeting glimpse.

From there, we headed to the city’s most prominent Sikh temple, the Gurudwara Bangla Sahib. We parked our shoes and socks, donned head coverings, and made a circuit around the inside of the building, respectfully observing Sikhs worship and listening to the live inspirational music. The real treat, however, was the visit to the facility’s kitchen, where Poonam told us 150,000 people have a meal on Sundays. Feeding the visitors were dozens of volunteers, young and old, men and women, making chapatis and stirring enormous cauldrons of…more chickpeas and other vegetables I suppose. The atmosphere was one of all-encompassing peace. I’d mentioned Chana Masala the previous day at lunch, and the restaurant didn’t have any! so this day Poonam took us to lunch to a restaurant her family enjoys for a quick snacky lunch, specializing in fast street food, but in a real restaurant setting. Holy smokes, those were the best chickpeas and fried bread we’ve ever had. To close out our time in India’s capital region, we visited the government district. The views were not spectacular owing to the smog, and frankly, that part was a little boring. Not sure what I was expecting, really, given that it’s only been the capital in that form since, oh, the British gave the country back to them, but I was non-plussed. I much preferred to observe these monkeys on the side of the road.