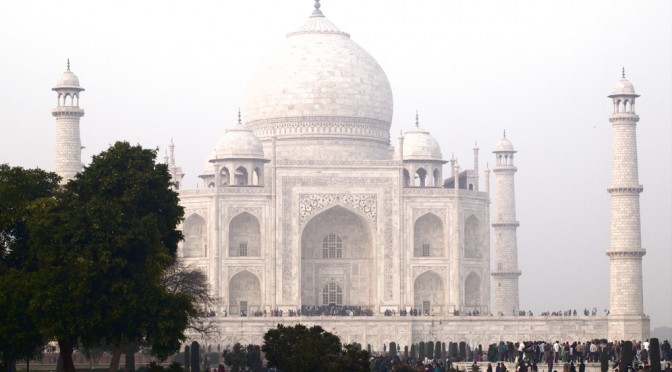 We flew to India on a package tour in January 2014. It was our first time in that country; we hope it won’t be our last. This is Part 2 of the story. Catch up with Part 1 if you missed the start.

The next leg of our journey took us from Delhi to Agra. Praveen picked us up from the hotel in the morning and we got on a nearly deserted toll highway, heading south towards Agra.

It was a smooth ride, but there was almost nothing to be seen along the way. The fog (smoke? smog?) limited our view quite severely. Apparently not many vehicles were willing to fork over the toll, so we had the road mostly to ourselves. We got to the hotel, dropped our stuff, and then got back into the car to meet our Agra guide, Jatin.

He gave us a little more background on the Taj Mahal: its purpose, its patron, his motivation, the history between his heyday and colonial British “rediscovery” of the monument in an overgrown forest area. We enjoyed the people watching as much as the monument itself.

The next day: back into the car. We headed for Agra Fort and had a look around there with Jatin. The sewage smell as we approached was, well, breathtaking, but that was the only part of India that didn’t agree with our noses. Also here the foggy weather plagued our views, but in some of the shots it also lends a little perspective. That same day we visited Fatehpur Sikri, but not before getting stuck in a massive traffic jam. Our route leaving the city of Agra was blocked by religious parades, so we opted for an alternative route. Then, stuck in a tiny town straddling the only road in or out, we (and countless other cars and trucks) waited a couple hours for another parade of Muslim children to make their way past us so that we could continue. The shouting via electric megaphone was kind of nerve-wracking, along with overloaded trucks scraping past us in the opposite direction now and then. But the biggest source of pressure was an internal one, if you know what I mean. I was glad to arrive at our lunch restaurant deep in the middle of absolutely nowhere, even if we were 3 hours late.

The next stop: Jaipur, our final leg.