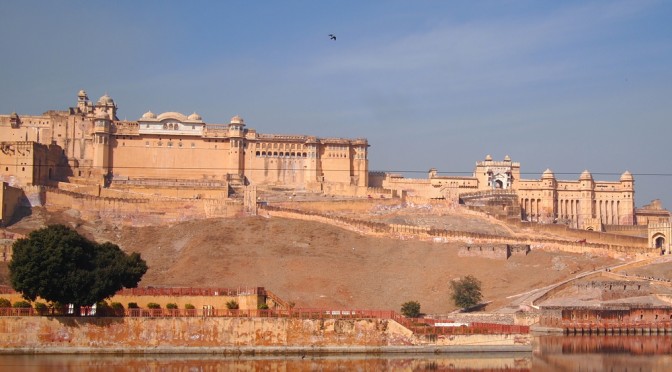 We flew to India on a package tour in January 2014. It was our first time in that country; we hope it won’t be our last. This is Part 3 of the story. Catch up via Part 1 or Part 2 if you need to.

We arrived in Jaipur very late indeed — well past dark and too tired to do anything but snag some dinner at the hotel. The next day we got started kind of early exploring the Amber Fort.

Amber doesn’t refer to the color of fortress’ building materials or rich deposits of fossilized tree sap, or anything like that: it’s a religious name.1 We spent a good long time there admiring the views inside and outside the fort. Our guide Praboo was patient with us while we took it all in.

Then he brought us into to town to an ancient observatory, with the world’s largest sundial and other large-scale instruments for measuring and predicting the path of celestial objects across the sky. The giant sundial in particular was fascinating.

Next stop was the Jaipur City Palace. Inside the palace and grounds were a couple of museums as well: an armory, with the full gamut of edge and projectile weaponry; and a royal wardrobe exhibit.

The second full day in Jaipur, after driving past the Palace of Winds (Hawa Mahal) several times, we got a closer look at it, and from it down to the city scenes below. In fact, that’s what it’s for. Praboo told us it was for princesses to throw parties in an observe their subjects in the city going about their business.

We were looking forward to getting our shop on, or at least dawdling in the markets, but our timing was off. It was nearly eleven o’clock on a weekday (and what exactly does that mean?), but most of the shops were not yet open or just getting started. Praboo also seemed perplexed. I managed to snag some tea to import back to Germany and we dodged a few cows also out for their mid-morning stroll.

Lunch our second day was outside of Jaipur up in the hills in Dera Amer, following an elephant ride. Our ride was Hema. Our driver didn’t speak much English, but his elephant must have been great. Hema was gentle and only needed one stop on our 45-minute ride through the hills for a leafy snack. At this point in the trip, we were in serious need of a little peace and quiet. The excursion was perfect for that. We saw a handful of mongooses2 — and even heard them moving around in the brush before seeing them. Plus several wild peacocks and even an antelope a hundred yards from Hema’s path through the brush. We dismounted at a rustic pavilion in a clearing where a rather elegant (given the surroundings) buffet lunch was waiting for us. One other table had guests, and they were just leaving. That afternoon, plus a good night’s sleep, was exactly what we needed to get through the next day.

Our trip was winding down. We spent a good four hours on the road the next day, which was what Parveen expected. That trip just a few days earlier was a 10-hour drive due to congestion from a truck fire. These are multi-lane highways dominated by truck transport, with passenger cars, motorcycles, and tractors mixed in. The intersections are not well planned, there is a constant risk of pedestrians crossing the road, and those trucks, pretty as they are, are prone to toppling. We saw at least one freshly fallen over, blocking a lane. In the end, we arrived safe and sound at our hotel in a Delhi suburb close to the airport for our last overnight.