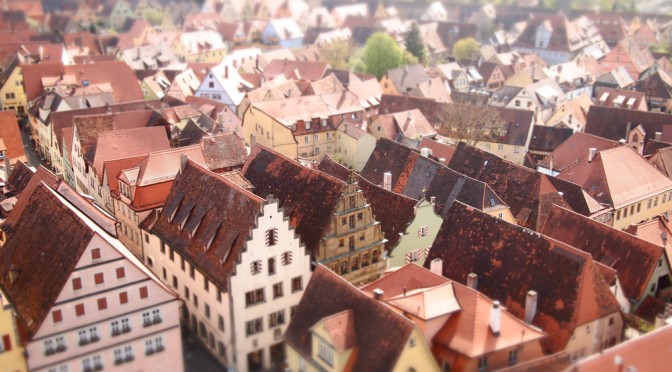 We finally crossed another long-standing item off our list of spots to visit in Germany: Rothenburg ob der Tauber. We joined forces with Steven of Doin’ Time on the Donau for a day trip and were rewarded for our resolute planning (despite crummy weather predictions) with bright skies, light breezes, and low tourism saturation.


It feels further than it looks. Regensburg is definitely Ostbayern (Eastern Bavaria), and Rothenburg is classified as Mittlefranken (Middle Franconia), but it’s pretty much right on the border with Baden-Württemberg. We might have goofed on the way back a bit. We forgot to set up our GPS upon departure and drove slightly out of our way towards Würzburg before finding the A3 towards Regensburg, costing us an extra 25 minutes.

This might be the German nagivational style working against us: we were sure we’d be fine without a GPS dictating every step, since we made it there on time and without any surprises. Heading back via signs alone was misleading, because we should have followed signs for Ulm (if only for a little stretch) to put us on an intercept course to the A6. Ulm sounded scarily far away and off course, so when forced to choose, we followed signs for Würzburg instead.
But the weather was fine, the company excellent, and none of us was facing any time pressure, so it was no big deal.

To many, it must be the archetypical German town. It’s got:

I suppose that’s why there are so many hotels and Gasthäuser and similar in such a small place. Indeed, historically, Rothenburg served as a model to Germans as well, though not in a way you’d want.

Actually, there was almost no plan. Steven had a couple things he specifically wanted to check out, and those sounded fine to Sarah and me, so we reserved the day far in advance (hoping for decent weather — and we got it).

We arrived at about 10:00 in the morning this last Saturday and parked just outside the city wall for €5 for an all-day parking pass. Right in the parking lot we heard a lot of English being spoken. I thought the place must be overrun with tourists, but in fact that was not the case. There were a couple larger groups of tourists and several families exploring together we saw throughout the day, but it was far from crowded.

We opted to take in the view from the top of the Rathaus as long as the weather seemed to be cooperating (and in fact, it held out for the whole day). That cost €2 per head and I’d say it was well worth it. The stairwell up was just as cramped as you’d expect, but the very last bit was not what I expected: essentially a permanently-mounted a step-ladder up to the roof level and observation deck. It was so steep that you have to descend back down into the tower backwards to minimize the risk of falling down those steps onto the visitors waiting below.

We did a walk around a portion of perimeter and through the city center from the north to the Burg in the south, where a shady park and perky little flowers await visitors looking to have a sit. Also back in that park are a few monuments and memorials to the founding of the town and the town’s Jewish population, persecuted and expelled at numerous points since the 1100s. Moving on along the southern edge of town again, we stopped in for an excellent lunch (with thanks to Trip Advisor for the recommendation) at the #2 place in the city (#1 was closed until dinnertime). Some more strolling, and walking a section up inside the wall, we noticed that there are plaques with inscriptions from visitors from all over the world — presumably those are donors (or donating organizations) contributing to the upkeep of the city. Soon it was time for an afternoon coffee break and then a pleasant drive back to Regensburg.