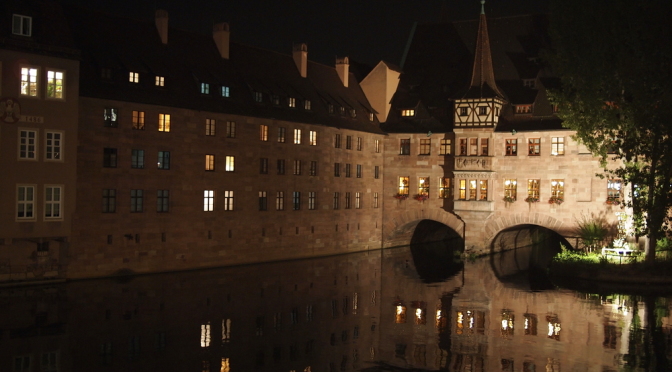 A bit late off the mark here, considering 2014 is already winding down. September 2014 we got some of the old gang back together again for a meetup near and dear to us Regensbloggers: Nuremberg.


Resident on Earth took over the planning of the traditional Friday side trip — this time to Bamberg. She led us around a tour of the little town’s landmarks and in for a great lunch at one of the city’s Rauchbier breweries. Like beer? Like bacon? Why have you never been to Bamberg?

One of the big deals in Bamberg is its nifty bridge over the Regnitz. You think the art on the building is playing cards with your eye and trumping it, but the bluff is backed up by real objects coming out of the surface.

We got rained on pretty much that whole Friday in Bamberg, and it was an omen for the torrential rains awaiting us the rest of the weekend in Nuremberg. Here are a few more random Bamberg shots:

Need to get out of the rain in Nuremberg? My tip: spend 5€ exploring the DB Museum there. Fünf Mäuse well-spent — and that’s after only having explored the ground floor.

We got rained on so hard that I refused to take any pictures the rest of the trip. We still enjoyed each other’s company — especially once ol’ pal Deutschland Über Elvis arrived Friday night after work — but the Saturday tour was a complete wash, in the cleansing waters sense. Umbrellas seemed to make no difference at all, since at times it felt like the rain was coming at us sideways or up from beneath them to smack us in the face.

We ate once at the Heilig Geist Spital, once at Kopernikus for some great pierogi, and had some drinks at Cafe Luftsprung before calling it an early night. I think that rain whooped us. Sunday morning brunch at the eclectic Zeit und Raum was a bit confusing, owing to the labyrinthine building structure and complicated path from our seating area to the buffet. But like most WEBMU itinerary events, the people make all the difference and it was great to catch up again.