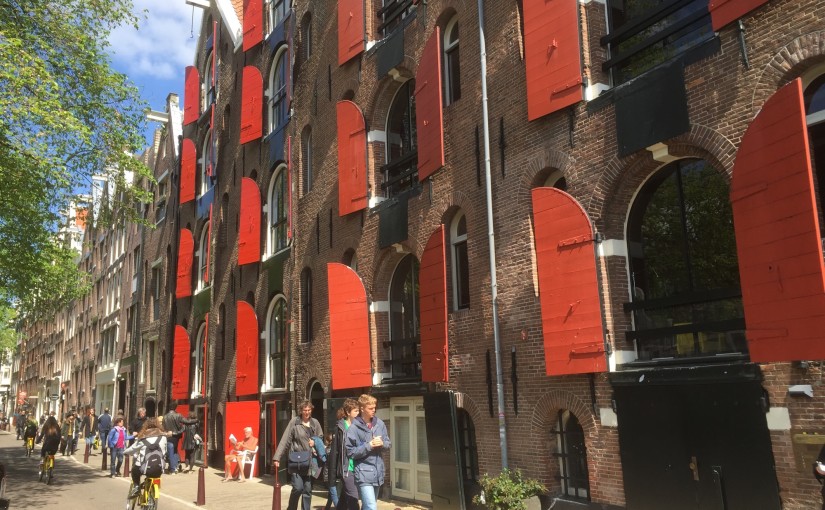 Seems like everyone in Europe has been to Amsterdam. Well, now we have, too. Sarah had wanted a visit to this city for a long time, so we planned this trip as a birthday present many months ago (around the time of her actual birthday, which is not a good time to be in the Northern Hemisphere). We got pretty lucky with the weather; you never know when you’re pre-paying hotel and airfare that far in advance.1

We took advantage of Christi Himmelfahrt, which, as you can see on our Bavarian Holiday Calendar, is nicely pre-progammed for burning off overtime on Fridays in May. We were not the only visitors from Germany there that weekend — not by a long shot. There were plenty of other visiting nationalities, but we heard English the most; even more than Dutch… …which is too bad, really. Dutch is so much fun to read for the native English speaker with some German skills. The word parts stack up together just like German, but look like they’re written with a broken keyboard, and sound — sort of — like English. Voetganger is probably my favorite Dutch word, halfway to English from German. It’s not so much individual words that sound like English, but rather the tonal aspects of spoken Dutch sound like English. When we hear Dutch on the street in Regensburg, until we’re close enough to ascertain that it’s not, we usually mistake it for English. Reading Dutch is a treat for those who pick up on vowel and consonant shifts between related languages. But even if you’re not into Germanic languages, if you can do English, you’ll be fine in Amsterdam. Not only are they good at it, they seemed so happy to use it with us.

There is so much neat grub to try in Amsterdam!

A friend pointed us to Eat Your World and we used that for a lot of inspiration. Combine those addresses and descriptions with some offline maps and you can walk your way up and down the canals all day from meal to meal. Despite our best efforts, we never managed to try some of the things on our shortlist: snert, a traditional pea soup, or broodje pom.

The trams and busses are well-established, too. A €7.50 ticket is good for the whole system2 for 24 hours for when your feet are worn out or the weather turns not-so-nice. We stayed near Museumplein, which gave us easy access to many tram and bus lines.

This might be an attraction, or a welcome respite from a rainy day. Admission is not cheap — €17.50 per adult head — but the collection is impressive.

These are the principal reasons I was skeptical about Amsterdam in the first place. We stumbled upon the red light district in the mid-afternoon walking across town on a mission to get a piece of Appeltaart from Winkel in Jordaan. If you pay better attention, you can probably avoid it altogether quite easily. We could not however avoid the “coffeeshops” catering to pot smokers. In fact, we smelled pot within 30 seconds of leaving the front door of the airport. Your nose will be guide along the canals, too. Fortunately, if that’s not your scene, that’s the most you have to partake of it.

In retrospect, I wish I hadn’t waited so long for a visit to Amsterdam. Next time, we will make that broodje pom happen!

3 thoughts on “Christi Himmelfahrt in Amsterdam”