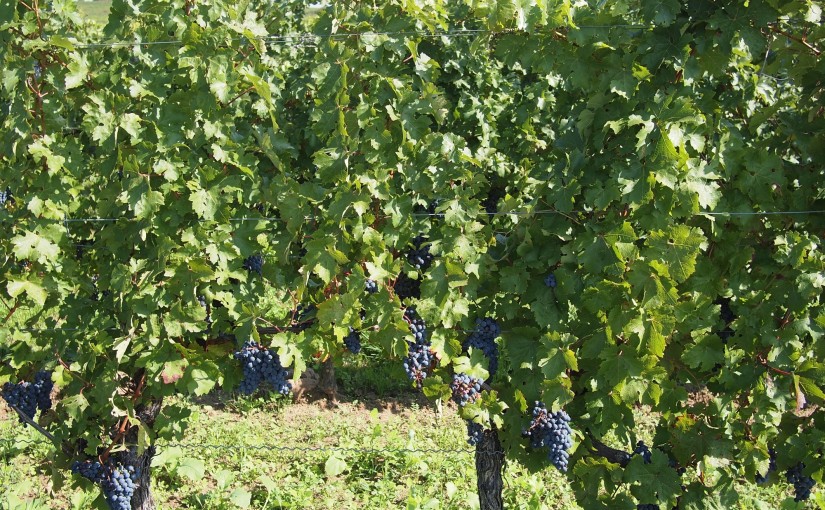 Summer’s done. The Herbstdult came and went, and our neighborhood’s Weinfest with it. Time for a short break to the other corner of the country, to a similar-sounding place that sort of used to be Bavarian outside of Bavaria. 1

The Heidelberger first convinced us to come try the Kulinarische Weinwanderung in Freinsheim with them in 2012. Ever since then, we’ve been plotting our return.

Back then, we used the ÖPNV2 to get from Heidelberg in Baden-Württemberg over to Freinsheim in Rhineland-Palatinate and save us the trouble of trying to park in or near the tiny town and keeping at least one Genießer in reserve as a Designated Driver for the trip back.

This year, the Heidelberger are more accurately described as Birminghammer and pal Snooker trained it down from Berlin. We picked her up in Mannheim on the way to a Ferienwohnung within walking distance of the town of Freinsheim: about 5 kilometers, one way.

3 That was a peaceful tromp through vineyards and along country roads from Großkarlbach down into Freinsheim, and about a 12 € taxi trip back late in the day, after we decided we’d rather not hoof it back after all. In retrospect: we probably should have taken a taxi in both directions. The road was not well-suited for foot traffic (some blind corners on hills, never any usable shoulder), so we were in vineyards and orchards for much of the way once we left Großkarlbach. Freinsheim is a cute little town. Once inside the gate, we could already see the streams of people following signs to the start of the Weinwanderung. From there, it was 7 kilometers of gastro-pilgrimage, and though we got started relatively early, arriving in Freinsheim on foot around noon, about 30 minutes after the Weinwanderung officially opened up for the day, the stream of visitors was already in full force.

Like on our last visit, there was a surprising variety of food on offer: everything from typical Germany-wide Fest fare (think Bratwurstsemmeln) to regional specialities (Saumagen) to gourmet-on-the-way stuff (exotic soups and seafood). The stands seemed to be separated into food and drink, which is great, because you shouldn’t try to sample something from every stand along the route: there were 20 stations, and most stations had at least a couple food items to try and three or four wine varieties on offer. All of that local atmosphere, plus cooperative weather, led to miles of smiles. 5 thoughts on “It’s not our Pfalz! Kulinarische Weinwanderung Freinsheim 2015”