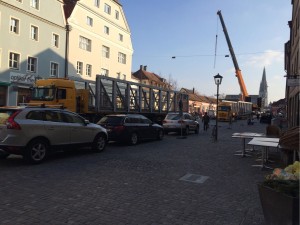 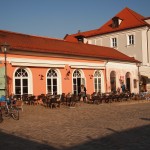 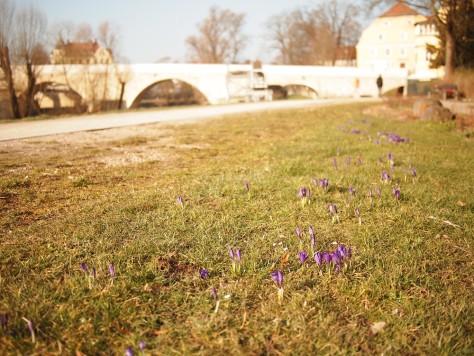 It’s only been the last few years that the REWE chain of supermarkets has set up shop in parts of Regensburg we visit.  It’s not a new company, but for whatever reason, Regensburg hasn’t had (much of) a REWE presence of its own.  Long have we had various full-scale grocery stores such as

and the discounters, such as

But a new challenger entered the ring about a year ago:  there is now a REWE City store on Dachauplatz where the Hotel Karmeliten used to be.  This might be the tail end of the Dachauplatz revitalization including the Markthalle and Alnatura and parking garage.  It’s a fairly convenient alternative to the Edeka grocery store tucked away in the basement of Galeria Kaufhof on Neupfarrplatz, if a bit cramped1.

Along with the massive development on the eastern edge of the city, where the sugar refinery used to receive its shipments of beets via river freighters, there has been a full-service REWE supermarket in place for about a year now.  This is a convenient place for me to shop after work (or before; they are open 7 a.m. to 8 p.m. six days a week!) on days I’ve driven in with the car.  I’ve also snagged a few ready-to-eat wraps and sandwiches on my lunch break on occasion.

Sarah and I explored it together this weekend to check out the offerings and compare them to the grocery stores we already know well.  Much of the assortment was familiar, but we found these gems lurking.

To be fair, this isn’t much weirder than an elephant ear at the fairgrounds of Anytown, USA, and we all know pork has a starring role in German culture, so why not?

Besides anatomical tongues, other Zungen varieties include Seezungen and Landzungen, and they all mean vastly different things.

I guess if they’re going to declare war on your lawn, the least they could do is provide some cake as a piece offering2.

Putting aside the potential English-language puns on the brand name for a moment3, those quotation marks in the product label creep me out.  Germany is far from alone on the list of quotation-mark abusers, but their application here feels not just wrong, but wrong.

Give a new contender a fair shot on one of your regular shopping trips.  We found some new brands of familiar items, some goofy items, and some quite unexpected items we’ve never seen before on offer in German stores.  This is a store in a district that used to be primarily industrial, but is transforming into residential — particularly for immigrants.  We saw Polish and Russian candy, a much wider selection of North African and Middle Eastern staples, and some generic American items:

Of course we didn’t buy any of those — the prices were ridiculous.  Nice to know they were there, though.