Two weekends ago the Reinheitsgebot turned 500 years old.1 Whether that law is still a good thing, or is worth respecting for its age (versus similar, older laws), is kinda irrelevant, if the weather’s getting nicer and you’re looking for an excuse to party. So, lots of areas of Germany did, including Regensburg.

We missed most of it, returning from a weekend away in Munich to a sad state of affairs on Sunday afternoon, with just one last little stand still open and serving on Kohlenmarkt.

But this weekend was a long one, for most of us, officially getting Thursday off to go to church and celebrate Christi Himmelfahrt, and tons of people taking the Friday following it as a “bridge day,” allowing a smooth transition to the weekend. This is a good holiday to officially welcome Spring and Summer with your fancy Bavarian clothes, particularly if you’re celebrating Father’s Day. Germans do that on Christi Himmelfahrt, and usually with a lot of booze.

Great day for a Craft Bier Fest then, right? It sure was. 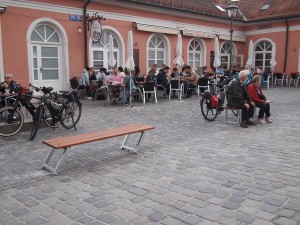 Before leaving Stadtamhof, we saw that the new benches lining the street and intended to keep illegal parking2 down to a minimum, were mostly already in use. Oops. Maybe that particular bench had to take one for the team.

On our march across the bridge towards the Craft Bier Fest, we saw that the Spitalgarten was full to bursting. An oompah band was keeping the spirits up while the patrons were doing the same.

The Craft Bier Fest was not a rip-roaring Oktoberfest-style beer bash. True to its name, it featured a wide selection of brewers selling samples: 0,1 L was the typical glass size. The atmosphere was quite mellow, with brewers on hand to answer questions and talk about their ingredients and flavor profiles and stuff like that. We liked it so much that we went both days, Thursday and Friday. Many of the varieties we tried this weekend are available at a local specialty beer shop, apparently (we’ve only window-shopped thus far).

It was great weather for a little change of beer pace. 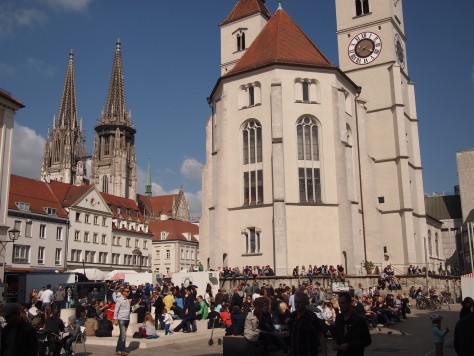 There wasn’t much food on offer, surprisingly, but this vendor made a showing: 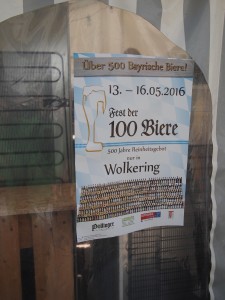 Not enough beer for you? Well, next weekend, there’s more! 500 Years of Reinheitsgebot carries on in a small town out south of Regensburg called Wolkering.

Sadly, practically nothing new to report. Sarah says they’re still doing something under that tent at the south end of the bridge, and has caught a glimpse once or twice of the bare earth, waiting to be resurfaced with new tiles to match the north end.  Probably the disconnected middle section of auxiliary bridge will eventually be connected to the south section, right?  They look pretty well lined up already.  Unless the south section is to become irrelevant soon.  That would be great. 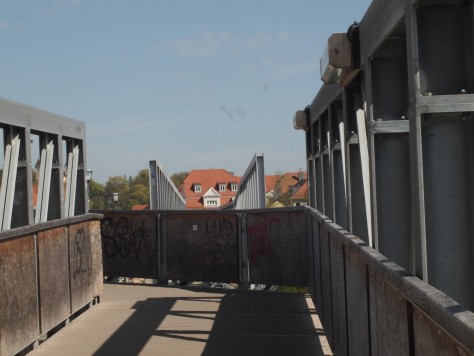 Another great thing would be for the thousands of pedestrians each day to not toss their trash into the bridge framework.  It’s filthy. 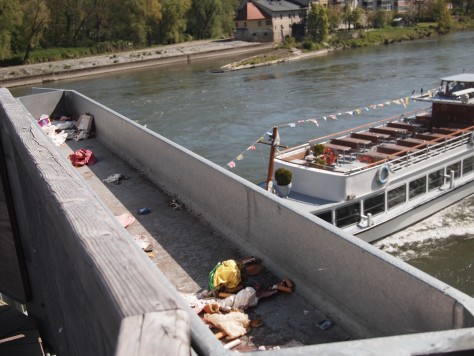 Wish that the rule shown below would apply to the bridge, too. 3 thoughts on “Some Bierfests, Ascension, and not really a Bridge Update”