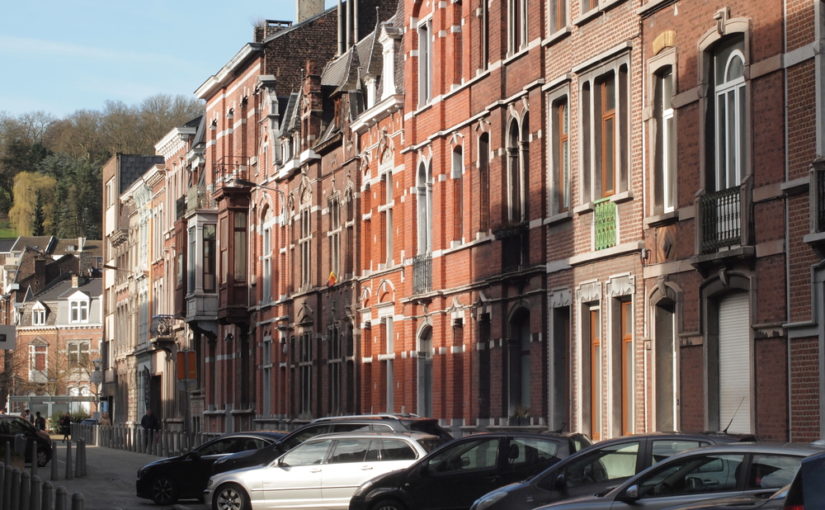 We needed to get the heck outta Dodge. Well, I did. With no travel from Mallorca until last weekend, it felt like we hadn’t been anywhere in ages. Don’t get us wrong, we’re enjoying the new place. But a whole lot of work intensity and no change of scenery to break it up made for a very real need to escape for a bit.

So here’s what we did:

Our FeWo was in the Fragnée neighborhood — with a couple sandwich shops and a big grocery store nearby and an easy walk to Liège’s central station, Guillemins.

The station was impressive during the day, but other-worldly at night. It reminded me of something out of “Encounter at Farpoint.”

Our landlady recommended a couple nearby restaurants, but none were able to accommodate us on short notice without a reservation. So we followed our noses2 to Namaste India, not far from the train station. Expecting MEAT AND POTATOES from Belgium later on that weekend, we tried to get our vegetables on with some of our favorite vegetarian dishes. And it was quite good.

Getting some frites from a frites joint downtown with a line out the door, we spotted this dish:

Yeah, that’s for real. And it was a popular choice among the locals: 4 or 5 others got the same order.

After our first night, we were able to get a table without a reservation at Au Concordia. It was a little fancier than we expected, considering its proximity to the train station, but we didn’t feel out-of-place in our weekend clothes compared to the other tables. We were very impressed with the MEAT AND POTATOES here. Star of the show: the green peppercorn creme sauce, which was great on the fries, the boiled potatoes, and the steak.

Liège was pretty, but kind of weird. We’ve been to plenty of places that have a mix of old and new architecture, but that’s usually been due to aerial bombing (see Nuremberg, Berlin, etc.). This felt like it was on purpose.

I wonder if this construction crew above has read the book below.

We spotted that book at the Bonnefanten Museum in Maastricht. Getting there was a cheap and easy half-hour IC train ride from the space mushroom in Liège. On the way, we needed some coffee and pastries. Enter Limburgse Vlaai.

You can bet we’ll be seeking out recipes to replicate that at home.

It was kind of a long walk from the Maastricht central station to the Bonnefanten Museum, but the weather was nice, and we wanted to take advantage of that.

We were pleasantly surprised by the contemporary exhibit there — Cai Guo-Qiang : My Stories of Painting BACA 2016

The whole top floor of the museum was devoted to the career of the artist and his family — several members of which are talented in their own fields.

Before leaving Maastricht, feeling pretty MEAT AND POTATO‘d up, we picked out a highly-rated Indonesian restaurant. We were lucky to get a table without a reservation — the place filled up around us. We ordered a vegetarian Rijsttafel3. All the otherwise-meaty bits were supplanted by tofu in various forms. It was all delicious and an excellent contrast to the pervasive MEAT AND POTATO cuisine in Liège.

The next day, we got up a little earlier than otherwise, breakfasted on some supermarket findings from the day before, and had an easy drive back to Regensburg to face the onslaught again.