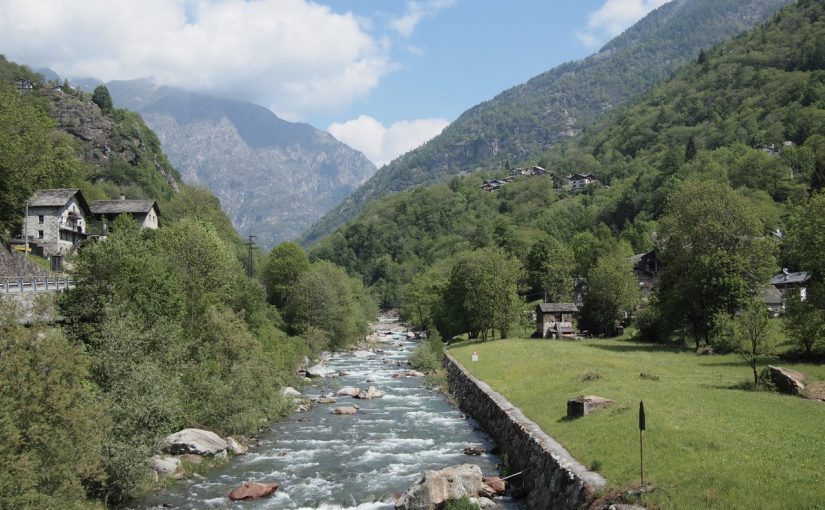 Mid-May 2017 we bugged out for (wait for it…) Italy again. But only just barely, kinda.

We started the trip out with a visit to Berlin to spend some time with our pal Snooker; that was in the works long before work stuff started amping up for me. So when it became clear that I needed a distraction from work stuff, we lumped a 6-day trip onto our 4-day weekend in Berlin with one stop overnight in our own place on the way from Berlin down and over to Aosta, Italy.

We clocked over 2500 KMs on our car — the biggest single trip yet. Spending all that time in the car, we needed some audio distraction. The audio in it is laughably poor, due to crummy factory speakers (and not enough of them) and some wacky AUX input wiring issues, so about a year ago we bought an Anker bluetooth speaker1 for use in the car. It’s got a great battery life and connects easily to either of our phones. It’s loud and clear enough for podcasts or audiobooks over the road and wind and engine noise of our car. It’s a little less well-suited for enjoying music while driving, to be sure, but for spoken audio, we’re quite happy with it.

Regensburg to Berlin and Back

We’ve done this drive a couple times. We got a hotel room at Motel One An der Urania which was nicely-located. A little expensive to park for four days, but better than most of the other options. It was a pretty easy walk over to Nollendorfplatz for breakfast at Café Berio twice.

Instead of a 7+ hour drive from Berlin to our digs in Liechtenstein, we opted for a 5 hour drive, change of laundry, and a night in our own bed before pressing on with a 3 hour drive the next morning to a ski resort in the hills above Vaduz, Liechtenstein.

Switzerland and Austria have a good racket going down there with the border crossing into/out of Germany near Lindau. You’ll be on three countries’ roads, which could very well mean you need a Vignette for Austria and Switzerland. We knew we’d need one for Switzerland for sure (about 40 CHF, valid for all of 2017), but weren’t 100% sure about Austria, so we coughed up the 8€ for a 10-day Austrian Vignette, too.

Part of the reason for a stay in Liechtenstein was that it was kind of on the way, but we also just wanted to experience a new country. Our list of unvisited European countries is growing ever-smaller. 2

Liechtenstein was pretty. And pretty small. I got the impression the Royal Oak post office is a bigger building than the seat of the government for the whole country of Liechtenstein. We strolled around Vaduz looking for a place for dinner on a Monday night — just about everything was closed. A single-person pizza and a beer ran about 30 CHF.

Oh, speaking of Swiss Francs: as we were walking down the mountain roads and catching the bus, we realized we had Euros in usable denominations, but only one 100 CHF bill. When the bus picked us up, I asked the driver if we could pay in Euros. He was reluctant; probably tired of Eurozone tourists forgetting that Liechtenstein uses the Swiss Franc. I asked if he’d prefer to break our 100 CHF bill, and that was A-OK with him. We ended up buying two all-day adult Bus Liechtenstein passes for about 10 CHF a piece. For some of the routes on the bus system there, during certain times of the year, you officially have to call ahead a reserve your transit. When we asked the driver about that he said “yeah, normally, but now I know and I’ll watch for you downtown and make sure you get back up the mountain.” Phone numbers for that are posted on the bus schedules at the stops. I shudder to think what a taxi ride up the mountain after our dinner would have costed.

View from our skilodge hotel room in Malbun

Steg — about 1/3rd down the mountain from Malbun towards Vaduz

There are a lot of names for this place:

Whatever you call it, it was a new part of Italy for us to discover.

We stayed just outside the Altstadt at B&B Mu — and our hosts were delightful. We highly recommend them. We enjoyed walking around the city. Like Regensburg, it’s a couple thousand years old, with a Roman fortress at its core, and plenty of architecture left over from that era.

We also took a few trips around the region in our car and via train.

B&B Mu left us a pamphlet of castles you can visit in the region. We headed up to Gressoney-Saint-Jean to see Castel Savoia. On the way, we drove through a gorgeous little town called Gaby. We would have eaten lunch there, but it was Wednesday, and apparently the town shuts down on Wednesdays. A little bit further up the road, a small sandwich board at a hillside hotel caught my eye, and we pulled in for a fantastic, very generous prix fixe lunch at Hotel Fiordiroccia.

That was all just drive-by chance on our way to Savoy Castle, a summer residence of Queen Margherita. Upon arrival, we took a tour of the interior of the castle. It would have been a great value, but it was only in Italian, and ours is not up to snuff for architecture, dynastic heraldry, or late nineteenth century royal family politics.

On one of the predicted-to-be-rainier days, we took a two-hour train ride to Turin3 to visit the automobile museum there. We didn’t have any expectations going in really, but I was quite impressed with the layout and interactivity of the museum exhibits — despite the PREGO NON TOCARE everywhere (it is a museum and they were priceless antiques after all). There was a good selection of early European and Golden Age North American car models there. But the clear focus was on FIAT-affiliated designs and designers.