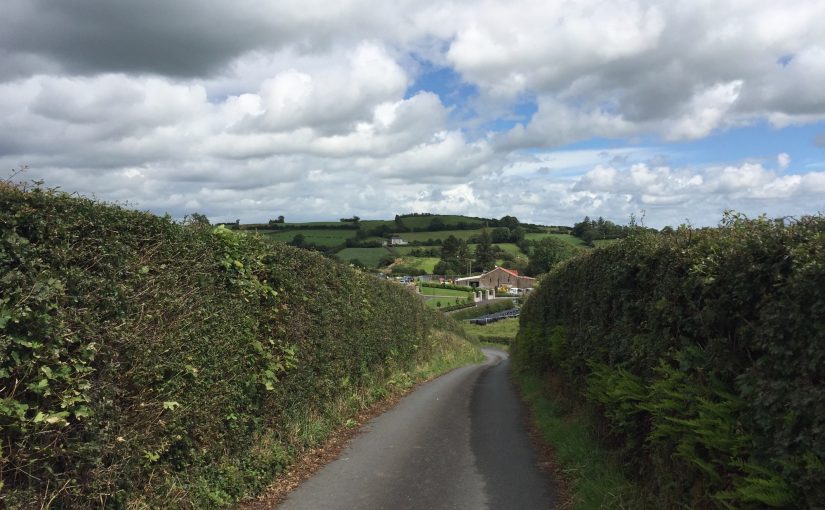 After our last vacation in Val d’Aosta back in May, a cumulation of stressy stuff at work since then, and some unexpected health issues complicating everyday life, we were very thankful to have planned a get-away trip to Ireland with our old college pal the Malge well in advance. This trip was definitely necessary to chill the heck out.

We flew in on a direct flight from Munich on a Friday evening. We were exhausted after a long work week. By that I mean longer days than normal, which is OK sometimes, but this week in particular was more densely jam-packed with more topics than normal too, and I think that wears me out quicker than the sheer number of hours worked. We had good intentions of taking a city bus or coach to our hotel in Donnybrook but in the end we succumbed to the ease and speed of a taxi. We liked the neighborhood quite a bit, and despite being well outside the action of downtown Dublin, there were a few nice restaurants within walking distance. I had the best Saag Paneer of my life (thus far) at Khan Balti House.

We spent most of our time in Dublin exploring and people-watching. We did this via the City Scape hop-on, hop-off bus (with a stop very near our hotel, surprisingly) and strolling around. We had grand aspirations to visit the city’s many

but with only two days to spend in Dublin, we picked the EPIC Irish Emigration Museum as our primary intellectual stimulation for the weekend. We were not disappointed. The museum covers many facets of Irish contributions to modern Western culture (the arts, technology, commerce, politics, you name it) in charming and engaging multi-media exhibits. The gimmick is a paper souvenir “passport” that you stamp upon completing a stage in the museum. It was really nicely done.

We headed out to the airport on an Air Coach bus to meet the Malge and our new pal his girlfriend. Their flight was four hours late due a series of unfortunate events beyond their control, but in the end it worked out. We drove them to Castle Leslie Estate — a very beautiful spot for equestrian activities and the like in the tiny village of Glaslough. We ate there a couple times and were very impressed with the food.

We AirBnB’d it for this one at Alice’s Loft & Cottages. We got a house that sleeps 9 comfortably. Clearly way more than we needed for just Sarah and me, but oh well — this was the best option in terms of price and proximity to Castle Leslie. When the weather is nice, it’s beautiful. When it’s about to change, it’s striking. When the rain comes, batten down the hatches. Many times throughout our stay the rain came crashing against the house from all directions at once.

During a bit of nice weather, I went out for a walk. I spotted some cows sunning themselves on a hillside in the distance and went over to say hello. They were not amused.

We had breakfast every morning in our Ferienhaus thanks to the nearby Lidl in Castleblayney, but usually did dinners out in the little towns: The Batch Loaf in Monaghan and Inside Out in Slane both wowed us with food, service and atmosphere.

We tried to get a tour and a meal at Castle Slane, but arrived too late for the tour and decided to scout out something else. It looked cool from the outside. It’s a rock concert venue now — big names and big draw.

We dipped a toe into the U.K. for dinner in Northern Ireland and some unplanned shopping. The fish and chips at Fish City came highly recommended and did not disappoint.

This is a prehistoric neolithic spooky burial mound funeral tomb kind of place. We didn’t really do our homework on this one, and when we got there, the last guided tour of the day was already underway and had been sold out since early that morning anyway, and according to a guy hanging around the visitor center, you can’t reserve tickets except on the same day…so be prepared to camp out or buy early and come back, or something. But anyway, the visitor center was pretty cool. Here’s the website. Do your homework on it, especially in high tourist season.

We stopped on the way to Galway for a little Irish history lesson at Athlone. This was a historically significant spot for the Williamite War in Ireland following the Glorious Revolution. There were really cool multi-media presentations and exhibits on the castle grounds, and much of the ramparts were open for exploring and gazing across the river.

It’s not in Eastern Ireland, or even the middle. But our buddy the Malge knew a guy who let us sleep at his newly-renovated house for free. So we drove across the country (you can do that in Ireland) for our last night. Unbeknownst to us, the Galway Races were just finishing up the day we arrived. After settling in, we called a taxi to take us into downtown Galway for some chow. It was crawling fancy-looking drunk people, spilling out of every possible doorway and window in Galway having a posh slosh. We were tired and hungry, and for the first time in the trip both the possible drivers of our rental car could partake in a bottle of wine for dinner at Cava Bodega before catching a taxi back for our last night in Ireland.