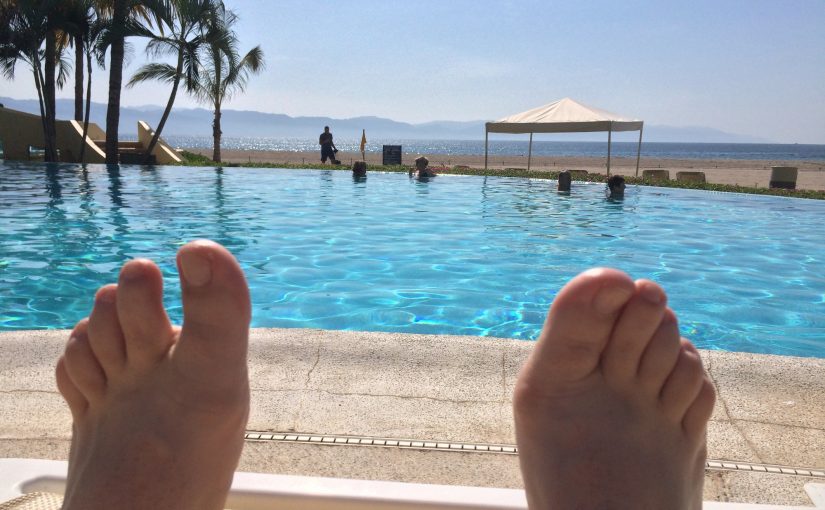 We returned to Puerto Vallarta again in January 2018 for a break from winter.1 It was glorious, like usual.

Except for the getting there, which (predictably) was nicht so toll.  But we didn’t let that wreck the mood. Our buddy from Boston and several-time visitor to Ye Olde Parental Condo flew in shortly after we did and the Good Times™ began to roll.

Sarah found us a cooking course offered through Cookin’ Vallarta and the three of us, along with about a dozen other people, learned from Chef Enrique and his team about the produce available at the fish, meat, and vegetable markets in Puerto Vallarta, before taking us back to his house/classroom2 kitchen to make

… and the two stars of the show,

I was impressed with the sheer number of ingredients in the mole, but wowed by the flavor that came out of it. I liked that everyone got a task to do (I made the tamal dough, Sarah was tasked with husking the cocoa beans for the mole, others were paired off to make the salsas or guacamole). And everyone got to form the tamal dough around the filling and cook his own tortillas on the hot griddle. All in all, it was an excellent way to spend 6 hours on a Tuesday. And we got lunch out of it!

We spent most of the rest of the time in Puerto Vallarta hanging out with my parents (who arrived a few days after our Boston Buddy departed). We went off the beaten path a bit to the Red Cabbage restaurant as a bit of a splash out with my parents towards the end of the trip. It was kind of a haul to get there, with

…but it was totally worth it. Unsure what to order once you’ve arrived? Try la Cena Frida. I loved it. It’s not on the menu on their website. It’s a sampler of lots of neat stuff with several courses and some drinks included. El flan finalmente era una cosa mágica. Note bien: ¡no se aceptan tarjetas de crédito! It will be late and dark when you’re done, and in all likelihood much wine will have been drunk. Spring for a taxi back. Note well: as opposed to the vast majority of restaurants we’ve visited in Puerto Vallarta, ¡no se aceptan tarjetas de crédito!

Here are my favorite pictures from the trip. ¡Hasta la próxima vez, Vallarta!

View from the bus

Iguana at the River Café