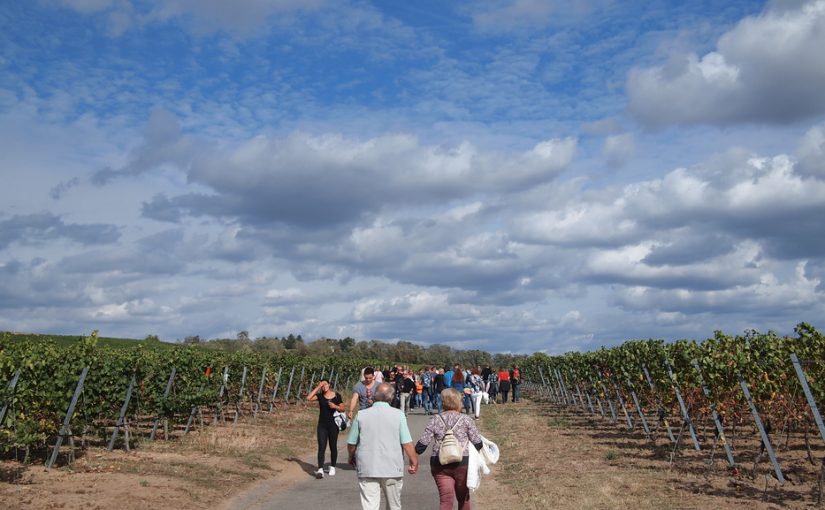 This is quickly becoming a tradition for us.

Dear pals in Heidelberg (at the time) convinced us to come visit them for a weekend and hit this perennial food and wine stroll (I’ve taken to calling it the “Freinsheimer Nosh & Slosh” but I doubt that’ll catch on) through the vineyards. From Heidelberg it was pretty easy to get four adults to the event and back using public transit, keeping all of us out of the DD pool.

Since they moved out of the country, we’ve soldiered on bravely. But last year they did a grand reunion tour through Germany including this festival in Freinsheim with us, so that was extra cool. This year, and the one before last, we joined forces with another convert from Berlin, who has rendezvoused with us Mannheim (two years ago) or met us in Regensburg for the road trip from the Oberpfalz to the Pfalz.

We’ve stayed at the same Ferienwohnung in Großkarlbach (not far from Freinsheim, but not really walkable, which means you need a DD or to shell out for a taxi ride) twice, but this year they were sold out when we tried to reserve. Sarah found us a FeWo in Kleinkarlbach instead, which had the added charm of being an easy walk to Kirchheim an der Weinstraße, which is a four-minute train ride from Freinsheim. A three-adult all-day RNV ticket cost us about 12 Euros, which was an excellent value. A one-way taxi trip would probably have cost at least twice that.

This year the route of the hike was drastically different: due to a “Flurbereinigung” the Wanderweg Schwarzes Kreuz was not open for foot traffic. But the alternative route was also pretty, if a bit more variable in terms of elevation. Fortunately, plenty of good eats and drinks were still to be had. And boy, did we have them.

Upon our return to Regensburg, we had some pretty dramatic weather as a storm passed through much of Germany. Right before it got nasty, though, the lighting downtown was kinda neat.