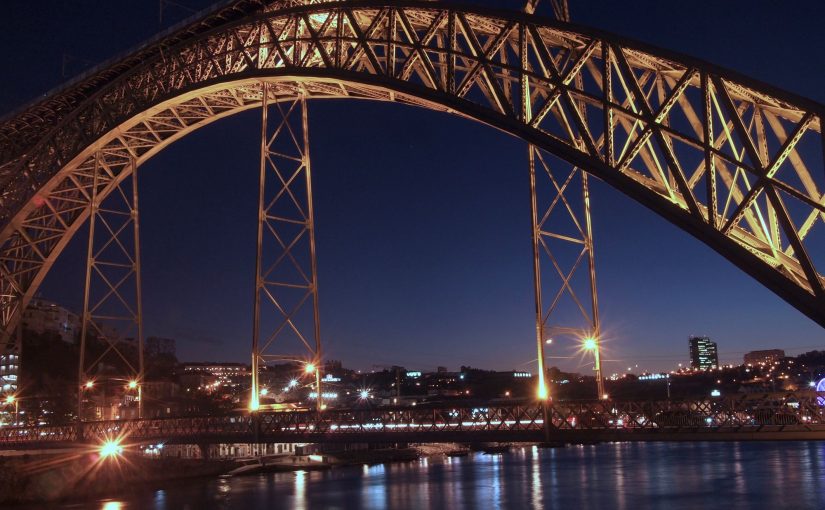 After that stunning — but chilling — visit to Iceland the first week of November, we knew we’d need a little dose of sun and warmth before diving into the long, dark Upper Palatinate winter.  We came back for basically a weekend at home in Regensburg before turning around and departing for Porto.

I thought we were just lucky with the place that Sarah picked out for us, but upon closer inspection of the subway schematic, it’s easy to get to much of Porto from the airport with few or no Umstiege. As it turned out, our place was smack in the middle between two stops along the Stammstrecke (man, is there a name for that in English?). For all that simplicity, it was still kind of hard to understand what kind of ticket to buy for what kind of travel (3-day pass, all-day, one-way, short hop, multi-zone?). A kind soul of a security guard at the airport metro kiosks pointed out that we were likely buying tickets way overblown for what we needed, and we should go talk to the woman over there (behind a little podium which looked nothing like a ticket counter) to get more appropriate ones.

View from our window

Sarah found us a gem of an apartment. We paid less than 70€ a night.

The only complaint might have been somewhat flaky wifi; it disconnected our devices frequently.

A pal, occasional travel buddy, and fellow Portophile recommended a Pasteis de Nata baking course she took through AirBnB. Since we couldn’t stop eating these wonderful custard tarts every morning while in Lisbon on a previous trip, we thought it important to at least learn how to make them on our own. That way, if a craving strikes at home in Regensburg, we

Going to be in Porto? Like to bake in a mixed-skill-level (both baking and ESL) environment? Take the course. It was a great way to spend a morning.

Eat some of this sausage while you are in Portugal! There’s a fascinating socio-cultural-political origin story waiting for you there. For our last night in Porto, we ate at Tabafeira, a restaurant that specializes in modern remixes of the dish.

Don’t tell your cardiologist about this one. Beef, pork, sausage, cheese, a little bread, beer sauce, and maybe even a fried egg under that top cheese layer, and a side of french fries will make your health insurance premiums go up. This “sandwich” is native to Porto, after a transplant was inspired by the croque-monsieur. There are countless variations on this theme. Do not try them all. But for the not-yet-hard-of-artery you can take a course on making these from the same docent offering the Pasteis de Nata course.

It’s dried, salted cod. It’s everywhere. We saw a lot of it in Porto from Icelandic waters. It’s almost like they were following us. Read more here: https://en.wikipedia.org/wiki/Bacalhau

This is the origin of port wine, from back when the British were trying to get good European red wine without having to deal with France. I wonder what innovations are in store this time around.

We booked an all-day excursion — also through AirBnB. Fortunately the meeting point was quite close to our Ferienwohnung. We rode in a van with about 10 other tourists about an hour north and east, headed inland, up one side of the Douro valley and down the other. We got some hillside views and took a short boat ride, admiring the vineyards on both sides before taking a winery tour, and getting lunch at a fancy place with plenty (too much, really) of excellent local food and wine.

This was the worst weather of the trip, which meant a lot of gray and brown landscapes under dark skies. It didn’t detract from the less visual parts of the tour — those things were great. But the scenery would have been dazzling with a little sun.

So instead, we made the most of some indoor wine appreciation. We booked a tour of Graham’s Port Lodge, with some sampling and bottles to be shipped back home.

We had a lovely time just walking around exploring on foot, both day and night. Here are some of our favorite shots.

Porto in mid-November was a really nice time and place to stave off the onset of winter. Let us know in the comments what attractions we missed so that we can follow up on them in our future plans. We’d love to go back.

8 thoughts on “Warming up in Porto”