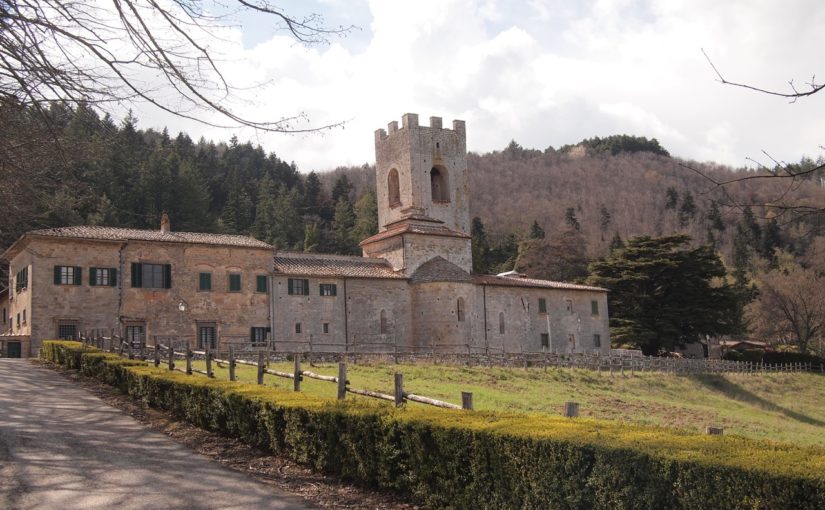 Our birthday/Christmas/anniversary presents to ourselves was a long April weekend attending a cooking course at a winery/abbey in Tuscany. If you watched “Salt Fat Acid Heat” on Netflix, this is the place (and these are the people!) where Samin makes pasta from scratch.

We decided to drive it down in two stages. Sarah found us an interesting-sounding place to stay about five hours south of Regensburg past Innsbruck on the outskirts of Trento, called Villa Sizzo. It’s a real villa, formerly occupied by nobility, but now run by a very nice German woman as a B&B.

It was kind of a gloomy day getting there, but the driving was OK. From there we headed towards Tuscany to our true destination, Badia a Coltibuono.

It’s an eleventh-century abbey. The rooms are the cells. They’ve been renovated at some point in the last thousand years, but it’s not entirely clear when. Definitely not since the 1970s, from the looks of it. The grounds were pretty, even under rainy conditions, and there are marked and mapped hiking trails leading into the hills above and below the abbey.

When we arrived, there was a pleasantly musty smell of wine emanating from hoses criss-crossing the courtyard. A truck from the related winery was moving stuff into or out of the casks in abbey’s basement.

There are sitting rooms, and libraries, and neo-classical renaissance type ceiling frescoes, and tons of neat stuff to look at if you need a break from all food and wine stuff.

Cooking and Eating There

We did a lot of that. Our 2-day course main instructor was Benedetta, assisted by Patrizia and a squad of other helpers. Everything was made from scratch, natch — but not always from start to finish by us, the students in the course. For example, the staff took over the deep frying of the zucchini sticks and operating the oven for our baked goods. But we did all the sauce work, chopping, and pasta-forming — even learned to play the chitarra. Our class size was 7 cooks: an American mom-and-son combo, a Costa Rican couple, the two of us, and a solo Costa Rican man. The class language was English (as are the recipes we got to take home with us on paper), but we all learned a few Italian cooking expressions along the way.

The kitchen was big enough to accommodate all of us in there watching and learning, but mostly doing.

It was a most delicious way to spend a rainy weekend in Tuscany. We’re already putting new skills and recipes to good use.

One thought on “Good Harvest at Badia a Coltibuono”