They each have their benefits and disadvantages.

I am so glad we never even considered renting a car. 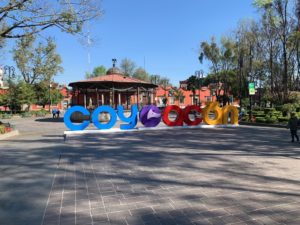 There were plenty of places to get breakfast, have a snack, get dinner, go out for ice cream, etc. all within a few hundred meters of our hotel. A guy we “met” online about 20 years ago who lives in Mexico City came to Coyoacán for an afternoon with much of his family to meet us in person for the first time. And they were delightful people. We’re looking forward to visiting them again on a future trip — either to Mexico City again, or maybe to one of their other home bases, like San Miguel de Allende.

You can spend so much time there. We went on Christmas Eve, and it was pretty much deserted. We reached our museum limit for the day and thought “oh great, let’s just do this again in a couple days to get the rest of the way through it.” When we came back on the Tuesday after Christmas, it was mobbed. The line to get in was several blocks long. But at least it moved rather quickly; I think our total wait in line was less than 45 minutes.

Also, lunch in the restaurant there on Christmas Eve was excellent. 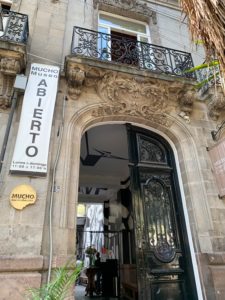 This was a little harder to find, but worth a visit none the less. It’s a small museum covering the historical and cultural influence of chocolate around the world, with a particular focus on early 20th century European consumption. Nothing in the gift shop really appealed to us, so we sat down outside for a delicious Sacher-like torte and cup of hot chocolate.

Around the time we departed for Newark on the way to Puerto Vallarta, Europe was just waking up to the Omicron variant threat. While we were in Puerto Vallarta and Mexico City, reports came flooding in of flight cancellations to, from and in the USA. I guess were lucky in that our route back to Germany didn’t take us through the USA. We were as vaccinated as possible. We had all the documentation for that in electronic and old-school paper (signed in ink by pharmacists!) form. Stepping off the plane in Munich, there were border patrol agents waiting for us at the gate, who took a preliminary glance at our residence permits and then waved us through (and that didn’t excuse us from the normal border patrol and passport check at all). We were holding our breath the whole time that we wouldn’t get stranded somewhere, and … we didn’t. But we’re still pretty sure it’s going to be a while before undertake so much travel in the space of a few months again.