A good solid broth makes all things possible! And a vegetarian one is accessible to everyone. This recipe is very simple and can be personalized to your own taste or use case. The amounts shown are what I use for an 8-liter (roughly 8 quart) pot.

Add all ingredients to a large soup pot, fill with cold water and bring to a boil. Reduce heat to a bare simmer and allow at least 2 liters to cook off. Filter and adjust seasoning as desired.

This came together as the amalgamation of at least 6 different pizza sauce recipes. Skip the pepper flakes if you prefer it mild. When cooking, I like to leave the sauce slightly thinner than optimal. We make pan pizza at home, so the thick crust needs a longer bake than the toppings. We bake the crust for 10 minutes with sauce only, then 10 more minutes with cheese and toppings. The first bake allows the sauce to evaporate extra liquid.

Heat a small saucepan to medium and add butter and oil, cooking until milk solids just start to brown. Add garlic and cook for 2 minutes or until very fragrant. Add tomatoes and juices to the pan. If you like your tomatoes chunky, add them to the pot whole and break them up with a spatula; for smoother sauce, run them through a food processor first. Stir in all of the rest of the ingredients plus a half-can of water, bring sauce to a simmer and cook on medium-low for one hour or until thickened, stirring occasionally. Remove onion, taste and adjust seasoning as necessary.

Pumpkin is pretty naturally sweet, so don’t be bashful with the salt and cheese.


Heat oil in large deep skillet to medium and bring broth to a low simmer. Sauté shallots and garlic until tender and fragrant. Add rice and stir until coated with oil and starting to smell toasty. Add wine and stir until mostly evaporated. Start adding broth by ladleful, stirring constantly. When the pan starts to look dry, add another ladle of broth. After adding about half of the broth, add the pumpkin, thyme and pepper. Taste and add salt, if needed. Keep adding broth until it’s gone. Once all broth is in, remove skillet from heat, stir in butter and half of cheese thoroughly, cover skillet and let stand for 5 minutes. Serve with cheese for sprinkling.

The soup place I used to work at had a couple of varieties that they offered every day. Chicken Pot Pie Soup was one of them and it was outstanding! Thick and rib-sticky, with a topping of pie-crust crumbles to really make it feel indulgent. This is an approximation of that soup with a few more vegetables thrown in for good measure. Leave out noodles and add 2-3 diced potatoes and this could work as pot-pie filling.


In a deep pot over medium-high heat, warm oil. Add 2 T butter, heat until starting to foam, then add onion, carrot, celery and garlic. Cook, stirring frequently, until tender and fragrant. Add 2-3 more T butter and cook until butter is deep golden and nutty smelling, then sprinkle flour over vegetable mixture. Lower heat to medium, stir until all flour is incorporated and roux turns dark blonde and nutty-bready smelling. Whisk in chicken broth in gradual additions to avoid lumps (3-4 additions will do). Add chicken, poultry seasoning, thyme and tarragon and bring to a boil, then lower heat to simmer for 6-8 minutes.

Turn heat back up and add boiling water. When boil is steady, add noodles and cook until about 2 minutes short of done. Add peas for final 2 minutes of noodle cook time. Remove from heat and stir in cream. Adjust seasonings and allow to sit covered for 5 minutes before serving. 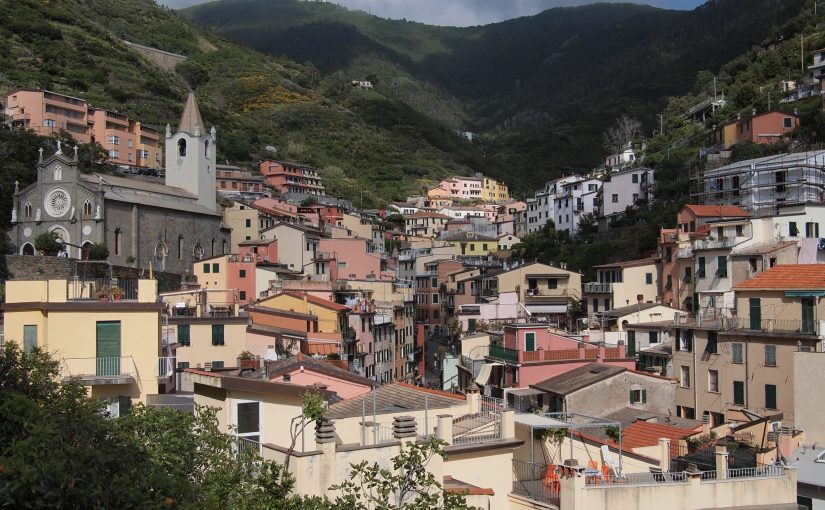 I find traveling is a set of skills that stays sharp when you do it often, but we’ve been on a bit of a travel hiatus. After spending a couple of weeks (a long stretch for us) in Mexico this January, we pretty much stayed put for early 2018. Besides, there was plenty that needed doing here. But the drought ended with a road trip to the Cinque Terre, on the northwestern coast of Italy, south of Genoa. In blundering ahead with our rusty skills, we missed a few points on the mental checklist. Here is what we learned so that you don’t have to: END_OF_DOCUMENT_TOKEN_TO_BE_REPLACED

Sounds fancy, but it’s an icebox cake. Raw eggs are in there, so if that’s a dealbreaker, best skip this one.

A couple of years ago, on a trip to France, we ended up poking around a Christmas market in Dijon. It was lunchtime and we were staring at a giant skillet (a poêle, linguistically related to paella) with potatoes and onions and bacon and cheese, all being stirred by strapping French country men. It was love at first sight. Chunks of Morbier cheese with its signature dark vein running through the center were on display, being tossed in as the cooks saw fit. We got a portion and split it. That was dumb; should’ve each gotten our own. After cross referencing multiple recipes, we FINALLY hit on a good reproduction.

The method is based on that of tartiflette, a potato dish developed in the 80s to promote Reblochon cheese. Reblochon is a much softer, brie-like cheese, as opposed Morbier, which you can slice. The firmer texture of Morbier is why I’ve upped the crème fraîche; runnier Reblochon made for a creamier finished product.

A note: you guys, it is SO EASY to mess up a gratin. Believe it or not, a pile of cheese and starch will be sad and bland if you don’t do the detail work. Think “eh, I don’t need to boil the potatoes, they’re going in the oven,” or “ew, I don’t want to cook the onions in bacon grease! I’ll use olive oil instead,” and you will ruin all your hard work. The potatoes need to be boiled in salted water or they’ll be gummy and bland. The onions need the bacon grease because of the smoky saltiness it imparts. The salt levels need to be checked and adjusted throughout the process to keep the flavors balanced. If you’re worried about this not being healthy, make something else. Cutting corners on this dish will render it inedible. A salad with a tart vinaigrette is the perfect accompaniment.

In a large pot, cover the potatoes with cold water. Bring to a boil over high heat, add salt, stir and lower heat to a steady simmer. Cook potatoes for 15-20 minutes, or until easily pierced with a sharp knife. Drain potatoes and set aside to cool. Do not rinse potatoes!

Heat a large skillet to medium high and cook the bacon until browned and crispy. Set on paper-towel lined plate to cool. Turn heat down to medium and add onions to the skillet to cook in the bacon drippings (if there are a lot of drippings, remove all but 2 T and set aside to add in case pan starts to look dry). Cook until softened and starting to caramelize, stirring only occasionally. Add a pinch or two of salt if needed (onions shouldn’t taste salty, just very oniony) and chopped garlic for last 2-3 minutes of cooking. Remove onions to deep bowl.

Preheat oven to 220° C or 425° F. Lightly but thoroughly butter a medium to medium-large baking dish (several individual deep crocks would also be great for a crowd). Chop cooled bacon into bits and add to onions. Add thyme, crème fraîche and cream to onion mixture and stir until well distributed. Slice cooled potatoes into generous 1/2 cm or 1/4 in pieces.

Assembly
Layer half of potatoes on bottom of buttered dish, using broken bits to fill in gaps. Top with half of onion mixture, spread evenly. Top onions with half of Morbier slices (try to leave small margin around sides of pan). Repeat sequence until all ingredients used up.

I’m not a full convert, but I do dig this whole one-pot recipe craze. Especially with pastas, I find the noodles are particularly infused with flavor. We were inspired by this recipe, but made a few changes. I imagine it’s great with the chicken, but we’ve only ever had it without and it has never disappointed.

In a deep pot, heat oil over medium-high heat. Sauté shallots and garlic until tender, then add peppers and cook for 2 minutes. Stir in tomato paste and cook until it begins to smell caramelized, then deglaze pot with sherry. Add tomatoes and break them up with a spatula. Add the water, oregano, pepper flakes and salt and bring to a boil.

Add the pasta and cook, stirring frequently, for 10-15 minutes or until almost tender. Turn heat down to low, add butter and basil. When butter is completely melted, add cheese and cream, stirring until integrated. Simmer for 5 minutes more, stirring all the time, then remove from heat. Let stand for a couple of minutes, then serve.

Spargelsaison is fun, but it can be a little one-note if you don’t have a variety of preparations for the stuff. If you’re lucky enough to have grilling weather while the asparagus is as its peak, this is a fantastic way to serve it alongside burgers or sausages. I found the original here and have posted my version below.

In a small skillet, heat olive oil to medium. Add shallot and garlic and cook until tender and fragrant. Set aside.

Cook orzo in salted water for 1 minute less than package directs. Add asparagus to orzo for last 2 minutes of cook time but no more! You want the asparagus to be bright green and still a little crispy when you drain the pasta. After draining the orzo and asparagus, run cold water over it immediately, agitating it frequently to make sure there are no pockets of heat. After draining and cooling, pour orzo and asparagus into a large salad bowl. Add artichokes and tomatoes to orzo bowl.

The verb ‘wohnen’ in German means to live, as in to inhabit. Thus the noun ‘Wohnung’ means apartment, as in place in which you live.

But what do you call an apartment that has become distinctly unliveable? END_OF_DOCUMENT_TOKEN_TO_BE_REPLACED