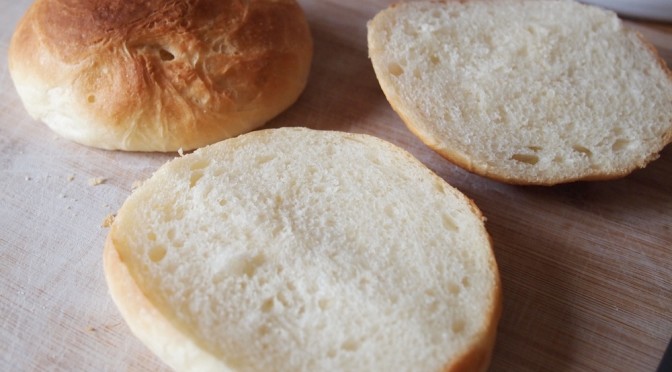 You can find American-style hamburger buns in Germany in many or maybe even all supermarkets, if you’re willing to buy into the kooky red-white-and-blue motifs. Those products, in our experience, are generally not bad. They’re usually not quite as soft as you’d expect a hamburger bun in the USA to be, and they’ll do just fine.

But they don’t have to. I found this recipe online yesterday for homemade hamburger buns and tried it out. It was a great success! END_OF_DOCUMENT_TOKEN_TO_BE_REPLACED

END_OF_DOCUMENT_TOKEN_TO_BE_REPLACED 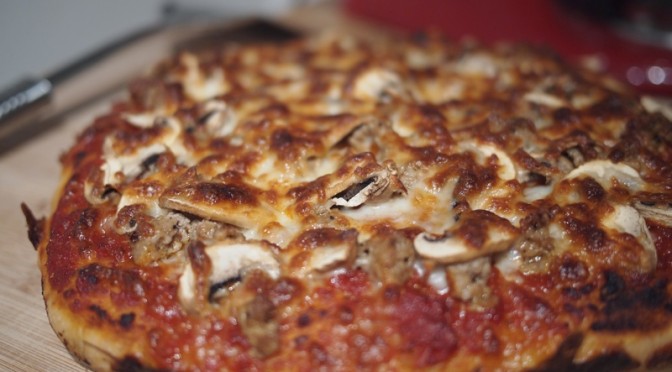 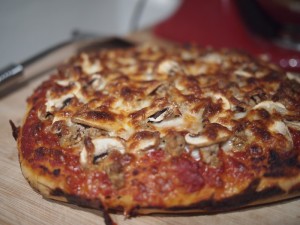 Here’re the results of our experiments with the basic no-knead pizza dough. END_OF_DOCUMENT_TOKEN_TO_BE_REPLACED I’ve been bitten by the pizza bug.

We’ve tried making pizza from scratch before, but never were really satisfied with the crust (Sarah’s sauce is awesome, however). It was always too flimsy, messy and difficult to move around or bake completely. So we stopped trying for a while.

But then we got inspiration from Food52. END_OF_DOCUMENT_TOKEN_TO_BE_REPLACED

I’ve been feeling crêpey all spring. I scouted out a cast iron crêpes pan (this one, specifically), trying to get a nice, wide flat surface, but one that will still fit in our kitchen cabinets and on our little European stove. I specifically wanted cast iron (which effectively means I’ll never be able to clean it) so I can use a metal spatula (a long, skinny offset one you’d use to spread frosting on a cake) to maneuver my crêpes without tearing up the ptfe coating. Alas, I fear I won’t ever be able to make crêpes in the proportion of those guys at carnivals, but what I’ve been able to produce has been very tasty, and didn’t require more than a little practice. END_OF_DOCUMENT_TOKEN_TO_BE_REPLACED

This recipe inspired us to make use of our rosemary plant, which stuck it out all winter in our back room flower box and is still going strong at the time of writing. We’ve rewritten it a bit to reflect our own preferences (more garlic, more rosemary) and writing style and include metric equivalencies, where appropriate. It’s not all that hard to make, but it does require a lot of sitting around. Maybe not even as much as described here, but the mystical bread alchemy stuff eludes me beyond a certain point.

Our Netto practically across the street from us has closed with very little warning (about a week). This is bad news; it means the only grocery store on the island is the Biomarkt next to the Netto. Not that the Biomarkt itself is inherently bad, but the selection is not terribly good and everything there is expensive. One of the things we won’t be able to just stop in and pick up at Netto anymore is frozen bake-it-yourself garlic bread.

But then I found this recipe — and maybe that’s a silver lining. This is fast, easy, cheap, and most importantly, tasty.

Cut the baguette in half the long way, splitting it open. Cut the halves into serving-sized pieces. In a small bowl, mix butter, olive oil, garlic, oregano, salt and pepper. Spread the mixture evenly on the bread slices. On a medium baking sheet, arrange the slices evenly and broil a few minutes, until slightly brown. Check frequently so they do not burn. Remove from broiler. Top with cheese and return to broiler another minute or two, until cheese is slightly brown and melted. Serve at once.

Oh. My. Goodness. This is it. This is the recipe I have been looking for all these years. These are even better than the biscuits I couldn’t get von dem Obersten. The original recipe is linked above; my version (chiefly metric conversions) is below. I particularly liked the hint about not twisting the cutter when you cut them out to keep the texture optimum.

2. In a bowl, whisk together the flour, baking powder, baking soda, and salt till combined. Cut the butter into 1/2 inch (1.5 cm) cubes and drop into the flour mixture. Take the butter pieces between your fingers and press them until they are as thin as a nickel (1€).

3. Place the butter and flour mixture in the freezer for 15 minutes (that’s actually just a quarter of an hour).

4. Melt 1 tablespoon of butter in a small bowl and set aside for brushing the biscuits later.

6. Take the chilled flour and butter mixture out of the freezer. Slowly incorporate the buttermilk into the flour mixture. Gently fold the dough together with a spatula. The dough should not have any dry flour pockets and should not be overly sticky.

7. Transfer the dough to your work surface and pat it into a rough square. The original recipe instructs you to roll the dough into a rectangle about 1 inch thick, but that seemed too thick to me. I am sure I my average thickness was only about 2 cm and I didn’t roll out the dough at all — I just kind of flattened it with my hands. Using a 3 inch (7 cm) round cutter dusted with flour, cut out as many biscuits as you can. Do not twist the cutter; press the cutter straight down as you cut. Dip the cutter in flour between each cut. Gather the scraps and re-roll the dough until it’s the same thickness as before and cut out as many biscuits as possible. You should end up with about 9 biscuits according to the original, but we only got 8.

8. Brush the tops of the biscuits with the melted butter. Bake until biscuits look golden brown, about 17 to 20 minutes. Cool before serving—if you can wait that long. Actually, hold off if you can — seriously, they were even better at room temperature.

Scone success at last! We’ve made scones before – they’ve always been sad and hard. I think the combination of a normally functioning oven and a good recipe made the difference. We might tinker with this in the future to make sweet scones as well.

Combine dry ingredients. Add in butter and work with your hands to combine – make sure to work all lumps of butter into flour mixture. Add cheese, green onions, and buttermilk, and mix together. Add bacon and egg and mix until all the ingredients are incorporated. Turn dough out onto a floured flat surface and knead a few times to smooth out the dough – it will remain lumpy and sticky. Form dough into a ball, then flatten into a 1/2-inch thick disk. Cut the disk into wedges (we got 8). Spread wedges across a parchment-lined baking sheet, leaving a little room around them. Bake for 16-18 (we went for 20) minutes, or until the bottom of the scones start to brown and the cheese in the scone begins to turn golden. Best served warm.