I had last week off. It was kind of a staycation for us while the Best Man and his excellent Wife (shall we refer to them as “BMW”?) came to sample three regions in Bavaria: 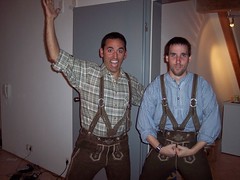 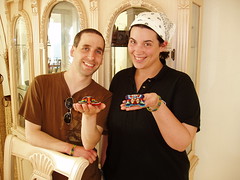 (okay, let’s stop that right now.) Nate had visited once before, back in 2004, along with fellow Algonquin Middle School alumnus Sam, and they got full into Oktoberfest mode. At that point, Carrie was just barely in the picture. But we got to know her over subsequent visits to Detroit and Puerto Vallarta and love to see how happy they are together. END_OF_DOCUMENT_TOKEN_TO_BE_REPLACED

It’s nice to have a mid-week mid-August day off.

Fans of the Bayern-Ticket (a Deutsche Bahn group ticket: up to 5 people, all day, all Bavaria) might need to read up on the new rules before traveling on it. Ostensibly to discourage scalpers or free-/cheaploaders, as of June 10, 2012, DB has started requiring that you state how many people will be traveling on the ticket at the point of purchase to determine price. The base price is 22€ for a single rider and an additional 4€ per additional rider. So people looking to tag along on a stranger’s Bayern-Ticket will need to find someone with an extra, pre-purchased slot. Conversely, purchasers of the Bayern-Ticket looking for Mitfahrer will need to purchase the extra slots at 4€ each; if this is your joint, go scrounge your train buddies before making the purchase. You are still not allowed to spontaneously add riders after you get checked on the train. Another bummer about this is the higher price for 3-, 4- and 5-person tickets (30, 34 and 38€, respectively), but it’s still a better deal than full-price tickets for all.

There is one improvement: you are now allowed to pre-purchase slots on a ticket and pick people up at other train stations. The lack of this permission on the Bayern-Ticket was something that always annoyed us, particularly when picking people up from airports.

If you read German and want all the ins and outs of the new rules, go to the DB New Bayern-Ticket Rules Overview. And if you live in Germany but outside of Bavaria, I don’t think any of the other Länder-Tickets have changed their terms, but be sure to check! We got up on time at the Hotel Alte Post in Oberammergau and the fog coming out of the mountains was too much for me to resist.

After driving straight through downtown Munich — isn’t there a better way to do this!? — we arrived at Weltenburg near Kelheim about two hours later. It was time for some lunch and a little exercise, hiking up the hill to the Roman fortress ruins and checking out the chapel at the monastery. And thus ended our road trip around Southern Germany. Hang on tight, please — this post is going veer and swerve violently around three pillars of pleasure for me: linguistics, google, and cheese.

Sarah’s mom gave her a book of recipes compiled by alumnae of her Catholic high school founded by an order of French nuns a couple of years ago (the giving, not the founding). Up until now, we haven’t done much with it except make fun of its name (I’ll spare you). But after our Strawberry Shortcake success on the weekend, I started thinking that we’ve become rather famous (at least in circles around the water cooler) for our dessert prowess. It might be good to branch out. So I started perusing the book and I found a winner pretty quickly.

We’re thinking about editing the recipe; we’ll update this post if it works well. These are really good and easy, but we’re interesting in giving them a boost of red or black pepper (or paprika maybe) and seeing how that goes.

Which brings us to the linguistics:

This stuff is fairly similar to Obatzda, which is a typical Biergarten treat. You’d expect more flavory things in an Obatzda like onions and garlic, but the general concept here was by-and-largely the same, if a bit more refined, owing to the touch of Fronce. Anyhoo, I was thinking about Obatzda, the word. Not so much what it means (someone explained that to me years ago), but what its non-Bavarianized equivalent would be. Based on what I hear people at the office say when they’re excited (mostly negatively…is that telling?), I surmised that the ‘O’ represented a high-German “an” and that the ‘batzd’ was a past-participle with a silent ‘-ge-‘ past-participle marker that Bavarians (at least here in the Oberpfalz often just don’t need to use). Lo and behold, that wikipedia link above confirms the suspicion. How I found that out is the third pillar of this post.

What’s the sound of me dorkin’ out on the computer? “Goosh!”

Man, that’s fun to say. It’s short for the Google Shell (think bash, ksh, csh, tcsh if you ever had a unix account at your university or place of employment). For the keyboard-loving information junkies, just point your browser at http://goosh.org and go to town – start off with an ‘h’ command to show you what’s available. The best part? In my opinion, it’s the “addengine” command, which puts the goosh toolbar in your Firefox browser’s list of searchboxes. From there, you have the power of all those commands right in the search box. Here’s how I used it and was so tickled that I started this post: “wiki Obatzda” and “in regenblogsblog.com shortcake”. I love the keyboard.