The guy who sold us this excursion described it as the “Hauptspeise,” versus the “Vorspeisen” we’d also been thinking about. “This is the one to go on,” he said, “if you’re interested in Turkey’s history and culture.” He was right. This was the mother lode, but not without its costs: money as well as time. It costs more than double the rest of the excursions we went on and since it’s an overnight package (with lodging and two meals a day included), you’re very likely wasting lodging and food you paid for at your resort…like we are. And we’re talking about 1200 km at a maximum of 90 km/h, which means a brutal schedule to keep and long, long hours cramped in a bus (guess where I’m writing this from). 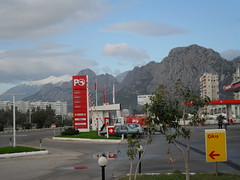 But it’s still worth it, in my opinion.

We got started with a 6:30 a.m. pickup on Sunday morning and headed North through the Taurus Mountains. We stopped for breakfast at a rest stop on the far side of the range outside Konya, and it was like walking into a giant mouth whose teeth had never been brushed. Ever. It was clean and apparently well-maintained. But intolerably smelly (at least, to us — no one else seemed to mind or notice).

We continued into downtown Konya to visit the site of an original Islamic Dervish sect, our guide giving us details about the sultan (at the time), his advisor and that guy’s son, who started the movement. He also gave us insight about modern Turkey’s secularism — which is not as straightforward as it might at first seem. Turkey outlawed various religious sects around the time of the Atatürk revolution. What I can’t figure out is that if the government should be separate from religious organizations, why would they interfere with religious sects like the Dervish? Especially ones (such as the Dervish) whose own tenets are ones of patience and tolerance?

But whatever. Inside the “museum” — since it can’t be a mosque, officially, anymore, we saw ancient Korans (some dating back to the 7th Century), carpets, and other artifacts and works of art. Very beautiful stuff — especially the miniature Koran, said to have been handwritten with an eyelash. 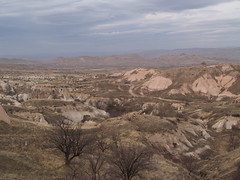 We got back on the bus and headed along the Silk Road through wide, flat country, until we needed a break for lunch. It was cheap and tasty in a clean and non-smelly rest stop (with free WLAN, no less!). We began to approach the inactive volcanoes of Cappadocia. We got some panorama shots of the area, viewing the results of millions of years of eruptions of ash and lava and the resulting erosion. Finally, we retired for the night in a quaint hotel made of the same stone as these structures: tuff (Tuffstein), the volcanic ash formed into lightweight and breathable stone over time. 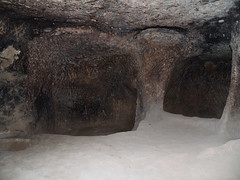 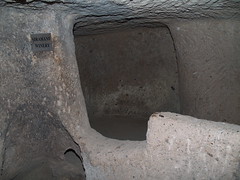 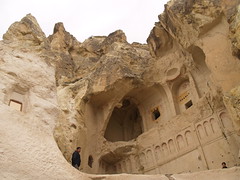 Dinner and breakfast at the hotel was very tasty — much better food than what we’d been getting at the resort. We got a jump on some of the rest of the tourists in the area, visiting an underground city (used for refuge in case of attack and also long-term storage of perishables, given the constant temperatures), and some ancient Orthodox churches set into these same kinds of Tuffstein structures. There are hundreds of these little churches set into the hills, some with very beautifully restored murals. No flash photography was allowed in them and also no tripods were allowed; else I might have some great shots of them here to share.

Then we got back in the bus for the same long trip back in reverse, this time with a stop at a jewelry store and pottery store and a Karavansaray — trading stop on the silk road connecting the Orient with Europe, rather like a small garrison to protect the traders from pirates and give them a sheltered place to rest — dating back to the 12th century. Once more back on the bus for the long ride back across the flat expanse of land between the volcanic hills of Cappadocia and the Taurus Mountains on our way “home” to Antalya.

We finally reached our hotel after about eleven hours of being on-the-go that day. There was a terrific wind/rain storm over night and it didn’t seem likely our afternoon flight would take off the next afternoon…but it all blew over. Here are some parting questions directed at Turkey experts:

We got home without incident; our flights and train connections were very pleasantly boring. It’s good to be back here, despite the typical Regensburg wintry mix.

The last slide show for this trip: