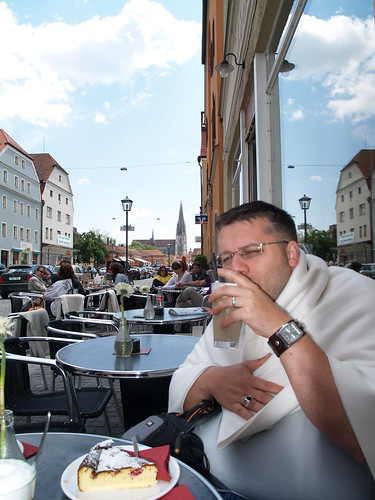 It becomes me, don’t you think?  Sarah snapped this picture of me enjoying an almond-flavored Caffe Latte and raspberry cheesecake at our local café.  And, due to the shade, the gratis blanket usage.

I could get have gotten used to this.

Prior to my trip to Romania tomorrow, I wanted to get a haircut. I’d been having very good luck at C&M on the corner of Am Römling and Ludwigstraße and their 11 € haircuts. Two quick, thorough, and very professional haircuts in a row done by the pleasant, if weird-looking Matthias, had me convinced I’d found a new favorite barber.

Third time wasn’t a charm, however. Matthias was busy with other clients (and I don’t know how to ask for a particular friseur — or whether they even do that, since this place works on the take-a-number FIFO format). I got a pleasant young-looking woman. I asked for a trim down to my usual 6mm and I thought all was well until suddenly another stylist came over to exlain that we had a problem. It seems the original one had cut a swath shorter than 6mm into the back of my head down by the neck and the only way to fix it was to cut that section of my hair down to 3mm or so and fade it longer up into the 6mm on the rest of my head. All staff members were apologetic and immediately offered to do this cut on the house due to their mistake.

But that looked dumb. So I had them do the whole head (barring the top) down to 3mm. OK, I like it short. But that made my beard look dumb. Once I got home, I tried trimming my beard so that it was shorter than the hair on my head, but that also looked less than optimal. So I trimmed the whole beard off (see below). I am kind of sad to see it go and return to the daily or nearly daily shaving regimen. So, two points to ponder for the future: These are some pretty cool computers. This is Matthias and me, checking out the PhotoBooth functionality at our local authorized Apple reseller.

I was going to surprise Sarah at the airport, but I blew it. Either way, I’m taking Thursday off, and it will be well-deserved.

The rosiness of in the face here is indicative of the windchill at…I dunno, 30km/h or so on my bike at home at night.

Dudswise: I’d say I’m coming into my own here. Went naturel on the hair today due to the helmet wearings. Probably won’t tomorrow as it’s kind of an important day with a pretty big presentation in front of a critical audience – I’ll need the extra hair goop again. Fortunately, I keep a stash at work right next to my emergency deodorant. Got several compliments on this outfit today.

Of course, I was posing like this all day too, so that may have influenced it. …but I think even I can admit that I need to downsize my shirts a little. Also these pants are at least a size too big, but I don’t have any other black ones.

Some colleagues and I traveled to Ingolstadt today and on average, we were pretty over-dressed. Felt actually kind of nice to be in that position for once.

Oh, and pardon the hair. I put too much goop in it this morning in a bit of a rush and it actually looked OK most of the day. Just a little goofy by the time I got home this evening. The blurriness here was an unintended touch of authenticity after a particularly long day. I’ve been wearing ties to work lately. Some people have noticed and some others have even commented. I normally don’t do this, but it’s a new year, and a new company, and I must sadly concede that people often treat you differently — at least in Regensburg, around our office — if you’re wearing a tie. Sorry ladies, if you start showing up in ties, you’ll likely be treated very differently.

Don’t expect me to complete the outfit with sport coats or heaven forbid a full-on suit any time soon. Baby steps, here people, and hopefully just one of them.

I didn’t hit upon the idea for this until last night, so Part 1 remains legendary. At least, I thought I looked good (a buddy at work mentioned that too, and he’s a pretty snazzy dresser). And besides, Sarah saw me in that outfit before she left for K.C. the other day.

So, here we go with the first installment. Today‘s pick: black shirt, greenish-gray pants and a gold tie.