After dodging the rain in Zagreb, we got back in our rental car, fired up the satnav thing (which had served us pretty well on the way to the Hague and back), and set off for Opatija. We were working on kind of a last-minute schedule, so the selection of available hotels/apartments was limited. Sarah found us two rooms for two nights at the Hotel Imperial, on the main drag in Opatija, Maršala Tita, just across the street from the Adriatic. Sounds great, doesn’t it? Then we learned from some tour-guide materials at the local tourist office (or perhaps it was Scott’s own independent research?) that it really was from the Austro-Hungarian Empire area — and it seemed like the whole area was set up as a resort complex and infrastructure supporting it for Austrian nobility. No real surprise then, that Croatia became the resort of choice for communist leaders after World War II. Aside from the WLAN in the lobby area, it appeared to be in those conditions still (though we could see it would take a lot of money, but it would be a glorious hotel if someone were to make the investment to restore and modernize it). I wonder if shower curtains were a symbol of bourgeois capitalist scum? Neither the Zurikas’ room nor ours were equipped with them, though there were rings and hooks and things. Weather still wasn’t great here (until our last evening and morning there, on which these pictures were taken), but we did at least manage to avoid the rain occasionally. We got our amusement from a terribly bad restaurant we considered, and then rejected, after discarding a suggestion Sarah or Jul or someone had found online, and then, in the end, decided to patronize after all — which was a mistake. (You can see I was pretty uninvolved with the planning — I just did the driving). Fortunately, after that we learned our lesson and paid more attention to the recommendations and had much better luck, especially once we got to Rovinj.

We took a 10km walk along the seaside partially in the rain. It’s paved the whole way. Maybe the on-again, off-again rain was a blessing, because I can see how that path would be glorious in good weather, and clogged with all kinds of tourists. Our destination on the walk was Lovran, and lunch at the Bellavista restaurant. I got about 500g of squid. At the bad restaurant the night before, I had already had fried calamari, so this time I tried it grilled. I didn’t do the math on that one; I should have figured that “grilled” meant “whole.” It was good, but there was an awful lot of it. And the flavor was nice, even if the texture was rubberier than deep-fried. The little town of Lovran was cute and a fair indicator of what was awaiting us on the next leg of the trip in Rovinj.

Roman Virdi has some really nice shots of Opatija here, some of which must have come from our hotel as well. 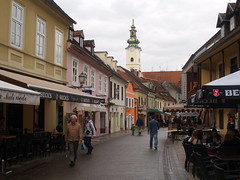 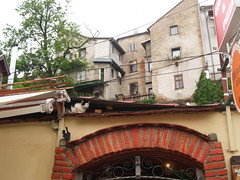