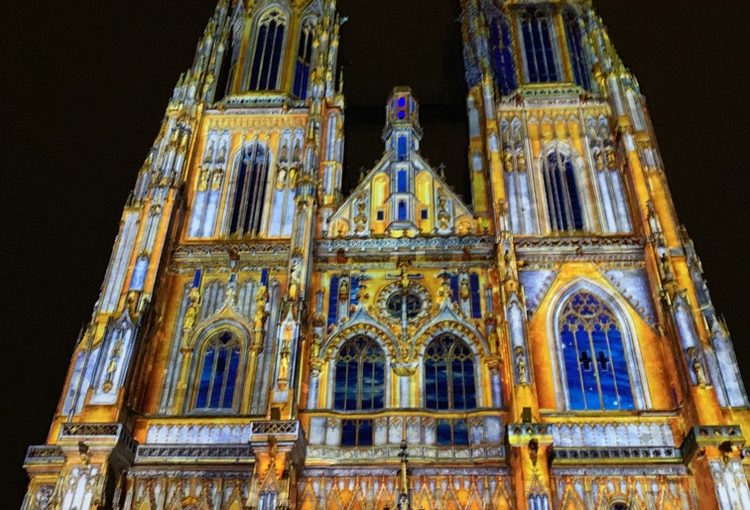 Last week one of our city’s most identifiable symbols played dress-up. You can read more about the event on the city’s webpage here (in German). The occasion is the 150th anniversary of the completion of the Dom’s towers. We probably would have missed the memo on it completely, but a colleague of mine called our attention to it.

For reference, here is what it looked like before the light show began: 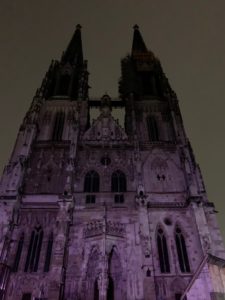 Music and a narrative, from the perspective of an apprentice and master stonemason, accompanied the light designs projected onto the cathedral. These stills look nice, but really it was the illumination’s animation that made it clear how the cathedral looked at different phases over its history.

A couple weeks ago, a story appeared in the local newspaper to explain what was up with the construction equipment blocking pedestrian access to St. Peter’s Cathedral at the heart of downtown Regensburg.

Turns out they discovered hairline cracks in the masonry rather high up. The cathedral is one of the biggest draws to the town, and an iconic symbol of Regensburg. There’s no way they could block off access to the area — not with the hordes of river cruise and bus tourists from around the world. But they also could not afford to risk a piece of masonry falling on anyone. Result: a pedestrian shield set up around the falling stone zone.

Regarding the bridge work: there’s nothing new to report, at least as far as we laypeople can see. The south end (the city side) is still closed off, and the auxiliary bridge is still up on the north end (Stadtamhof side). I can’t fathom why they left the auxiliary bridge up still on this end. Its purpose has been served. Its ugliness is universally accepted. Tear it down! I like standing at the north end of Stadtamhof and looking all the way down the street, across the bridge, and over to the Dom spires. But it still feels weird for bike traffic to come zooming down the main bridge again onto “our” street after 5 years of that not being an option.

After a long, hot, dry summer, we finally got a few hours of rain at the end of August. …and it looks great! I don’t think it’s looked this good since the freshly bepoped Pope came home for a visit in 2006 or so.