Privacy & Cookies: This site uses cookies. By continuing to use this website, you agree to their use.
To find out more, including how to control cookies, see here: Cookie Policy
In February 2012, we flew to Hong Kong for about a week. This was our first (non-business) trip to Asia.
The start of this story really takes place in October 2011 when I headed off to Shanghai on a business trip for a week. I flew from Munich to Dubai to Shanghai on Emirates and was so impressed with the airline that I mentioned to Sarah that this could be our stepping stone into Asia. She started keeping an eye out and pretty soon an Emirates sale on fares to Hong Kong and back revealed itself. We picked a pretty darn good time to be outside of Europe, but that was purely chance — we couldn’t have known then what miserable temperatures were in store for the second week of February, but since I’d been in Romania on business trip the week before we left for Shanghai, it made the coming travel to warmer climes all that more alluring.

Our departure from Regensburg was almost a disaster in itself: we’d planned on taking a taxi from our apartment to the train station, but 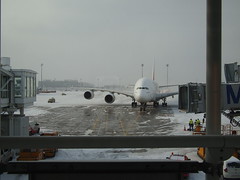 In the end, our taxi driver took pity on us and snuck through a few places he shouldn’t have and we boarded the train just fine, and we arrived at Munich Airport in Freising without incident. It was pretty cool watching our A380 pull up at the gate, and there was a crowd of German senior citizens all gathered ’round to take video/snapshots of it.

Sarah chose our seats via online check-in. The cattle-class configuration is 3-4-3, and the best she could do was get a couple seats together in a 4-person block. Turns out the seat next to her was vacant all the way to Dubai! We were thrilled to find full 110/220V AC power (suitable outlets for Euro and U.S. plugs!) in the armrest of our seats, and a 5V USB charging port next to each (rather large) personal video screen. The food on the flight met with our favor. Indeed, the lamb curry option must have been popular, because it had sold out by the time the flight attendant asked me my preference (Sarah got the last one). But the Chicken Parmigiana surprised me anyway. Or maybe it was the metal cutlery. I haven’t had that in Economy Class since…maybe ever?

We watched something like three movies each — and they were pretty good! Our only complaint (and this is a small thing): with such a modern, on-demand nifty inflight infotainment system, why do they still use those antiquanted 2-prong headphone jacks, which force you bring an adapter if you want to use your own headphones instead of the cheapo-freebie ones? Here are some explanations.

In Part 2, we arrive in Dubai in the middle of the night.