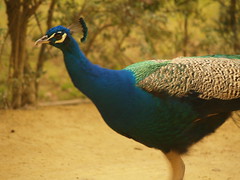 Our last full afternoon and evening in Seville was spent with walking around inside and outside the Alcázar de Sevilla, an originally Moorish fortress remodeled several times, and still currently in use today by the Spanish royal family. If we saw any of them while visiting, we didn’t know it. We got there kind of late in the day, and it was a little rainy and cool. We took great interest in the pottery and tile exhibit contained in the Alcázar itself. We enjoyed climbing around in the walls of the fortress and were thrilled to see a squadron of peacocks wandering the gardens; dismayed though to see them chased by kids of various ages.

We got several recommendations to stay in this neighborhood. In the end, we ended up with a hotel we really liked outside of that neighborhood, but strolling around there on our last morning before heading back to Germany was really nice. One square in front of a church was suddenly packed with people; we think a wedding service had just let out. It certainly was charming, if a bit surreal, with the Cinderella-style architecture all nestled in amongst typical urban scumminess. Orange trees lining the streets sure do account for the most pleasant-smelling street trash I have yet to step in. Check out the last picture here — foreshadowing Fukushima?

Not recommended (only because we didn’t try them, and it’s airport gift-shop snack food fare) — ham-flavored airport stuff.

Heartily recommended for breakfast sometime while you’re there: Churros y Chocolate. Think funnel cakes, but not sweet. These are dough strips, deep-fried and greasy. Dip them into the thick, rich, sweet chocolate to sweeten them up. We followed a sign from the main drag outside the Cathedral that said something like

…so we took a chance on one of our last mornings in town and were not disappointed.

Really, by anything, in the whole region. I’d like to take a car or bus trip along the coast and check out the small town scene next. ¡Adiós, Sevilla! 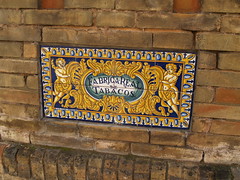 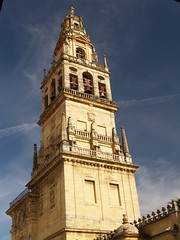 Following some advice from our extremely helpful and friendly hotel staff, we opted to do our third day on this trip outside of Sevilla in Córdoba, instead of Granada like we’d originally planned. We got a very pleasant taste of the Spanish train system and had plenty of good luck with the weather and the old walled city in Córdoba.

First challenge: picking a train station from which depart Seville. The rail network connecting Seville to other cities offers plenty of frequent options in all directions and classes of ticket, so we weren’t too worried about just showing up and picking a train based on whatever looked convenient at the time of our arrival. Our concierge recommended taking a taxi to the Santa Justa train station and departing from there. At first, we thought that was a little weird, like

Then we remembered, this is Spain, and not Germany.

We paid about 10 or 12€ for the taxi ride from the Casco Antiguo to Estación Santa Justa and put our Deutsche Bahn skills to work. At first glance, the layout of the train station seemed pretty much like many others we’d seen in Germany, Austria, Switzerland, etc.: a shopping area, ticket service counters, snack bars. We tried to use the ticket automats to seek out a hin-und-zurück connection to Córdoba, but gave up quickly owing to vocabulary deficiencies (indeed, I often struggle with these in English, too).

I have never seen the DB ticket counters organized in such a way, and for how often their long-distance trains are delayed and passengers must be re-routed, you’d think they’d implement a system like that. But OK, this wasn’t the last instance in which RENFE impressed us with its professionalism and organization.

We headed towards the platforms much earlier than we thought necessary. As we approached the long escalator leading down to the tracks, a woman asked us show her our tickets. She checked them, and allowed us to pass onto the escalator. At the bottom of the escalator, our bags (just backpacks full of camera stuff and bottled water and guide books and other typical tourist stuff) went through an x-ray machine. At that point, we remembered what might justify the extra security “just” at the train station. Post-baggage-screening, a guy in another smaller ticket window checked our tickets yet again and pointed us to toward the train car containing our reserved seats. A smiling Zugbegleiterin greeted us there and welcomed us on board into the spacious, roomy, clean, and pleasant-smelling train car. We were travelling in tourist-class seats on a high-speed line (think ICE equivalent). Nice!

Here are some final bits of knowledge gleaned from the experience:

We chowed down at the Bar Estrella our first night in Seville, thanks to our hotel staff’s recommendation for a local, not too touristy tapas bar in the area. The waiter was hard to understand, and with our habilidades del idioma, we surely weren’t the easiest, either…but we made it work and didn’t have to fall back to speaking English. He was good-natured about our attempts, and we could see that he appreciated it. Throughout the whole trip, we never found a single case where someone tried to switch to English on us after we started out in Spanish — what a refreshing change from our first couple years of living in Germany!

The English-language menu was the only thing we found in the place that seemed the least bit tourist-oriented (they had a small, paper, English version on the table of the Spanish-language menu published in chalk on the wall and out on the street), and it was a godsend. Nuestro vocabulario de la cucina no es suficiente. Especially for excluding things like seafood or squash. We tromped around in the rain a bit, killing time, waiting for the restaurant scene to wake up for the night.

The next day was also a bit rainy, but it eventually blew out. We spent most of the day in and around the world’s third largest church building. It has a special significance to those of us familiar with Kansas City’s Country Club Plaza, since its design was inspired by this cathedral. The sheer size completely wore us out, which is why we didn’t get a whole lot else done this day. Except eat some jamón. You can always do that. It’s hard not to. We were still tired from our full-day-of-arrival travel, so a quiet walk through a peaceful place was a nice way to start the first real day of vacation. It annoyed us at first that the Cathedral had an admissions fee, (they don’t require one at our Dom!) but we got over that quickly, once we got inside. I was pretty shocked and amazed that they didn’t prohibit flash or tripod photography (except in some very specific areas) inside the cathedral. We spent a good three hours walking around the guts of the place and climbing the tower — a twisty-turny continuous spiral ramp with interesting viewpoints and exhibits along the way up/down instead of 32 flights of stairs. We really could have spent more time in there, as the audio guides were rich in detail, but after about the twenty-second stop on the audio tour, we started to lose track of exactly which of the 80 chapels currently loomed before us.

We’re looking at a possible trip to a long-time wishlist destination of ours: Spain. More specifically, Seville. We’re still in the planning stages, but are looking at a winter trip and would love to read your experiences there, regardless of season. Please write/link to them in the comments.