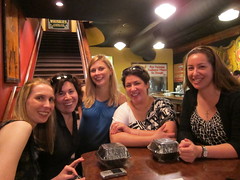 Sarah’s family is pretty big. Here’s like one-seventh of her cousins on just her dad’s side. 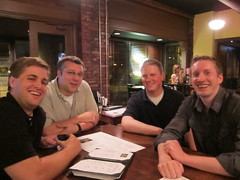 And here are their husbands and boyfriends (minus Laura’s dude, who showed up later).

They organized a small get-together for us while we were in K.C. last month, which was nice because since we’d last visited, all these new guys had joined the party. 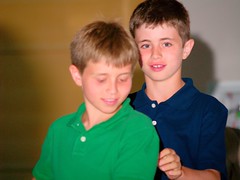 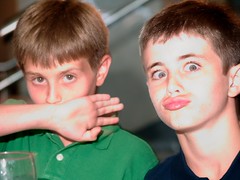 If you’ve got about 4 and a half minutes and have seen any pictures of ours since about September 2007, take a look at this. You might catch a fleeting glimpse of yourself or someone you know.

My Pummelvision from Cliff 1976 on Vimeo.

Pummelvision made this video for me at Vimeo based on images from my flickr photostream. I think it’s pretty neat. Just three steps:

1. I created a free account at Vimeo, and gave Pummelvision permission to use it.

2. I told Pummelvision to go check out my flickr photostream and make the Vimeo video.

3. Then I waited about a day for an email to arrive notifying me that the video is complete.

Details on the entire process are at pummelvision.com, but there’s really nothing more to it than that. In future versions you might be able to customize the music or select sets or collections for pummeling, but at the moment it’s one-size-fits-all.