Today we took the bus out to Harting to witness something we’ve been hearing about for a few years now, but never had the chance to witness: raising the maypole in Harting. Our pals who live in this village to the South and East of Regensburg were already there, reserving a table. I observed the whole process, from the band parading into the village, the representatives of the village’s volunteer fire department and sporting clubs bringing the pole into town with their bare hands, to the hour-long process of aligning the base and gradually propping the pole into vertical position, all while staying well-supplied with Maßen of Bischofshof.

You don’t get this kind of cuteness in downtown Regensburg, or on the island where we live. I dug it.

Wow, just one glass of wine each* at the Stadtamhof Weinfest really got us loopy. Good thing we live about 3 stumbles from the action. The fun continues tomorrow, so if you’re stopping by, let us know. Our bathrooms are guaranteed better than the public ones at the end of the street, because we don’t let just anyone in.

*I had a glass of some Tempranillo. Reminded me of the Coronas 2005 to which Cool Guy Matt introduced us, but quite not as smooth and easy. Sarah had an Agnes Crianza, which is perfect, if you like to lick the insides of wine barrels. 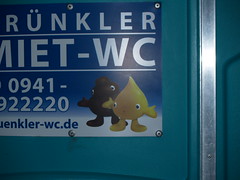 It’s festy time again here in Regensburg. This is the second time in two weeks we’ve suffered through Sweet Home Alabama / Werewolf in London / the awful Kid Rock fusion of the two has been within earshot of our apartment.

This time it’s Bürgerfest. Coming home from work late night (it was another 10-hour day…not fond of those), I noticed a klezmery sound coming from the extreme east end of our island. Turns out it was a Shantelly-kind-of-band — lots of horns with plenty of Eastern European intricacy. They even whipped out a fancy version of Hava Nagila before I got thirsty and we headed back to the apartment through the crowds enjoying the craprock. No really, it was bad. Think Zydeco-flavored renditions of that awful Inner Circle song “Sweat” from 1992 done by dudes in Tracht but with Rasta wigs on.

Not making that up.

So last year up at the Maschseefest I was there with a coworker and our wives, and there were some groovy-sounding Latin-American-flavored tunes (actually, as an aside — the Maschseefest was surreal, much like what I saw of Hannover itself). Co-worker dude asks me if I like Samba. I say, “Sure I do. What’s not to like?” He says, “There’s a samba festival in Coburg. We should go.”

Then yesterday, 6+ months later, Homes pushes a printout from http://www.samba-festival.de/ toward me and says, “So, you still game?”

I am not, but only because of a scheduling conflict. I’d consider next year. Anyone done this? I’d appreciate comments and opinions from anyone who goes this year, because I’m interested for next year.

First the interesting part — check out this cucumber we spotted at Edeka today while shopping! Locals: wondering why Sarah’s not to be found outside the apartment this weekend? Here’s why. To be fair, the weather was positively awful. The wind noise at the beginning of the track was that of wind getting amplified through the salsa band’s microphones and speakers, not my MD recorder. It was pouring. So I gotta give ’em credit for gumption inspite of the weather, at least.

I’m hoping for some less whitebread-sounding stuff this evening. Stumbling upon something as cool as the Jazz Police like at last year’s Bürgerfest would be redeeming. So I’m lounging comfortably with all the windows open enjoying the breeze, for the first time in days, I might add, where there’s been breeze and no rain, having worked all day from home.

Suddenly a piano-y folky terribly offkey uptempo version of Twisted Sister’s We’re Not Going to Take It which medley’d into the Proclaimers’ 500 Miles from the not-very-groundbreaking album Sunshine on Leith (ZOMG why do I know that?) .