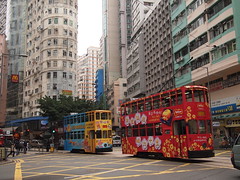 On our first day after the 25+ hours of getting there, we consulted our Frommer’s book and decided to hop on a tram to catch an MTR train across the harbor into Kowloon to get a glimpse of a Taoist temple. Hong Kong’s trams are shaped like its double-decker buses, but they move more slowly and predictably (since they run on a track). All tram fares cost the same, no matter where you get on or how many stops you ride. Enter at the back of the tram and pay (with exact change, or your Octopus card) upon exiting at the front.

It was at this point that we discovered we’d misinterpreted the terms of our Airport Express purchase. We thought it covered three days’ of unlimited public transit, but in fact it only covers three days of unlimited MTR transit. So we had to quickly cough up some HK$ coins to pay our fare upon exiting. We felt like schmoes, but the tram driver was more than gracious about us holding up his tram. We got on the Island line at Sheung Wan, changed to a line to take us into Kowloon, changed again and continued for several more stops to Wong Tai Sin, on our way to the Taoist temple of the same name.

We could tell we were close by the smell of the incense burning and the rattling sounds of something unknown. First we took a walk through the Good Wish Garden, admiring how peaceful it was while set in the middle of a 7-million-person city, surrounded by skyscraping apartment buildings.

After making our rounds through the garden, we approached the temple’s main altar and discovered the source of the rattling sounds. Hundreds of people were practicing kau cim, and then getting their results analyzed by the professionals.

This was our first full day in Hong Kong (or anywhere in Asia, for that matter), and as such we were still pretty flabbergasted by its density (population, architecture, commerce) and drastically different scene as an observer at ground-level.