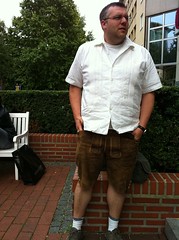 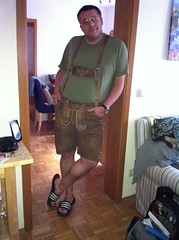 I missed the kick-off of the Dult this year in Regensburg due to a business trip to Frankfurt, but I still wanted to get into the spirit. Last week Sarah and pal Matt and I were cruising the fairgrounds, and I spotted this ‘Hose. I’d been thinking about acquiring another set anyways — I still love my black set, but I’ve come to think of them as my “formal” or “Fall & Winter” set. I wanted a shorter set, in brown, for the Spring and Summer fashion season.

I’ve been wearing them around the house since I got back from Iași yesterday to try to break them in properly. According to the saleswoman, they won’t ever feel “right” if they spend all their time in a Schrank — you gotta move around in them, sweat in the them a little, get them used to you before they start to feel like they really fit.