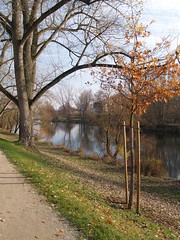 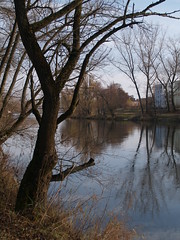 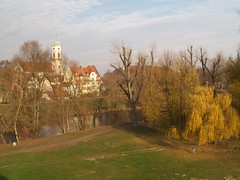 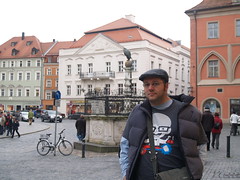 Our aging-when-we-bought-it-new laptop teetered another step toward the abyss while at the airport in Mexico City between flights on our way to Puerto Vallarta. It was there that the flakiness Sarah and I’d seen revealed itself to be due, at least in part, to a failing hard drive.

“OK, I can work around that…when we get back to Germany…” I thought to myself. I picked out an SATA hard disk drive from Amazon.de — a Toshiba MK2552GSX (250GB, for about 50 €) and downloaded a fresh ISO image of Kubuntu 9.04 (and burnt the ISO image to a CD on our Mac mini), removed the old Fujitsu 40GB SATA drive and connected the fresh new Toshiba one. The installation appeared to be going OK, until we got to the point in the process where the drive needs to be partitioned.

No dice. The BIOS wouldn’t recognnize the new drive.

“Hmm, maybe Scott‘s right and I should reflash the BIOS.” So I burnt an ISO image of that file onto CD, flashed the BIOS to the latest update for our lappy, a Fujitsu Siemens Amilo Pro V2035, and tried the whole thing again, just to make sure.

We’d previously tried out an Asus Eee PC purchased from amazon.de and were pretty satisfied with that little thing, except that the battery in it refused to hold a charge whatsoever. Reading up on that particular product online after-the-fact (uh…should have done that BEFORE-the-fact) I discovered that those Eee PC things are particularly prone to significant battery drain — even when the thing is completely off, even when the battery is completely disconnected from the machine. Which kinda works against the concept of keeping a netbook charged and ready to go with you out the door on your adventures. So we opted to send it back and ask for a refund rather than a replacement. Amazon.de was prompt about that, but it still annoyed me that they sent a defective product in the first place.

So now I’m looking at turning that Toshiba drive, which despite a BIOS flash is still unrecognizable to my old lappy, into an external hard drive for use with a different netbook. Looking around online, I noticed that Dell is offering 9″ netbooks with Ubuntu 8.04 installed and an SSD, upgradable RAM, and a few other upgradable or customizable features. Sounds great, right? Still maybe not optimal for what I want. Check out this little chat session I had with a CSR from them if you can read Dorktsch.

Specifically, I’m not sure how I feel about

Those things make me a little nervous. Still we are talking about a purchase of “only” 269€ (the way I configured my Wunschmaschine). I suppose Ubuntu (i.e. GNOME) might be just fine for our intended purposes (read email, do some light surfing, move photos from my camera onto an external HDD while traveling). Any advice to offer me? I’m particularly anyone who has bought one of these Dells or installed a flavor of Linux on another brand of netbook.