Warning: this post is intensely technical, bordering on arcane. It’s about improving your user-experience as a command-line user on remote Unix-like systems. As such, it’s probably not intended for you, but my hope is that someone else will find it useful. The usual geeky stuff (food, travel, language, etc.) will follow again soon.

If you ARE the someone else, score!

Ours is a pretty geeky apartment. But we don’t always just stay there at home; often our geekery needs to travel with us. END_OF_DOCUMENT_TOKEN_TO_BE_REPLACED 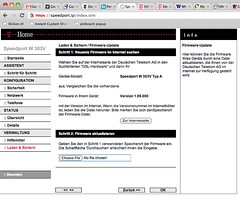 Which mobile provider do you use here in Germany? What do you like/dislike about them? Think about coverage. Billing. Pre-paid vs. contract. Perks. Roaming (EU and beyond). Especially welcome are your comparisons between operators/plans.

Seems like they all are the pits on the DB stretch between Regensburg and Nuremberg. Vodafone and Telekom are just okay for coverage in our apartment. O2 doesn’t work at all there — good thing we don’t need them to and didn’t move there with O2 contracts in place. But I like their pre-paid surfstick plan (with which I use a mifi instead of their stick and am publishing this now).

So, your turn now.