This is the next installment of our road trip around Northern Italy in September 2019. You can catch up on

It was only a few hours’ drive from the outskirts of Venice to the former capital of the Western Roman Empire, Ravenna.

We’d been to the town before, but last time, it was dark, and cold, and difficult to navigate with our rental car. This time we arrived with plenty of daylight, parked the car once, and did all the exploration on foot. The weather was generally agreeable this time, too — though some fierce winds and a brief rain spell motivated us to spend a little more time under the awning at a restaurant eating piadine for lunch.

END_OF_DOCUMENT_TOKEN_TO_BE_REPLACED

Part Five of our road trip through northern and central Italy in mid-November, 2011 brings us to a former empire capital. See Parts One, Two, Three and Four to catch up from the beginning.

The Chianti Road portion of our trip (Part Four) was the southern-most leg of the trip and the most intriguing, in terms of landscape. The cultural aspects of Florence and the Renaissance really shone through in Part Two. Ravenna returned us to a city-scape, but also gave us a glimpse much further back into the past.

Getting to Ravenna was pretty easy, but getting to the hotel IN Ravenna was like one of those dream sequences where no matter which way you turn, it’s wrong, and you can’t go back, and even though you can still SEE the turn you should have taken, you’re hampered by one-way streets and sudden lane merges. I guess we kind of forgot some of the lessons Verona taught us. Or, perhaps I did. Sarah had maps and confirmations printed out on paper for us, and I neglected to pack them. Oops.

Our GPS refused to take us to the address of the hotel, because it it’s in a pedestrian zone. So why couldn’t they program it to offer us parking lots nearby? We really could have used that kind of thoughtfulness, because the arrival directions from La Reunion were pretty much “head into town, follow the signs for the hospital and the fire department and then follow signs to La Reunion.” Not particularly helpful, given that one wrong turn (saw the La Reunion sign too late) embedded us deep in a labyrinth of one-way streets. I bet we lost 45 minutes driving around Ravenna just trying to get back on track. And then we found a nearby parking lot and paid 2,50 € to park for 30 minutes while checking into the hotel and they issued us a parking pass to park on the street.

The staff was exceedingly helpful and friendly, even after I tripped the circuit breaker in our rental apartment and calling the staff up to our unit to double-check the circuit box. Note: when your dad hands you free stuff from ACO like cheapo flashlights, say thank you. It was pitch black in there without a flashlight at hand. Thanks Dad! One of their power strips accepted our power strip and then promptly shorted out and died. Have you ever been traveling in Italy and not been able to plug in your German devices? The pins on my German power strip were too big for the Italian outlets! Fortunately the staff had a suitable adapter we could use. We were pretty well worn out after that little drama, the parking, the arrival at the hotel, and the road trip into and out of the Chianti region, so we called it a night and resumed regular tourism activities the next morning. 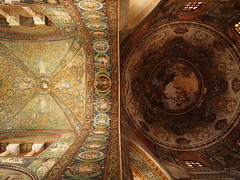 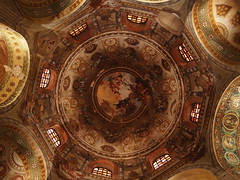 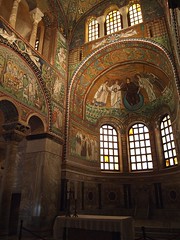 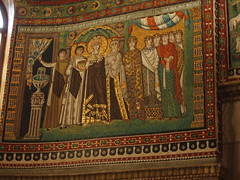 We set out of after a lackluster breakfast at La Reunion to visit two of the town’s claim on its UNESCO World Heritage status, the Basilica San Vitale and the Mausoleum of Galla Placidia. Entry to the whole site (including admission to five different exhibits/venues) was €9 and well worth it. Tripod and flash photography are not permitted, but being there in the off season meant it was largely empty and I was able to get long exposure shots of the ceilings simply by resting my camera on the ground and using the self-timer to snap the shot from a safe distance. We found the mosaic art fascinating.

And then we moved into the mausoleum just a few steps away for a much closer-up, but drastically shorter look at the same style of art — environmental conditions require a maximum five minute stay in the mausoleum. I’m not sure I’ve ever been in any mausoleum before; any future ones will compared to this one. 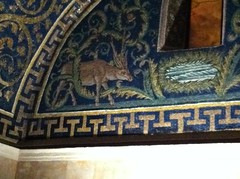 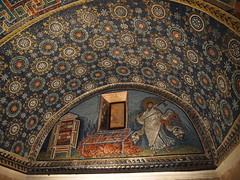 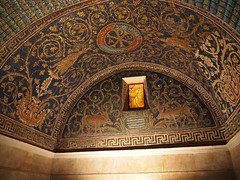 It was noticeably colder in Ravenna than anywhere else on our trip thus far; we welcomed a hot chocolate stop on the way back to our car for the final stop on our trip.