I don’t think I’ll ever buy mayonnaise again. The original recipe came from Mark Bittmann’s nifty How to Cook Everything app on my iPod touch, and it pretty much convinced me of that. It’s really easy to modify this recipe to get exotic — lots of ideas in the app for that, too.

It’s not a wholesale cut-n-paste of his recipe; we’ve found that we need lots less oil than he calls for. Here’s our base recipe; look for variations in the comments.

Sarah picked up a tall cylindrical melamine beaker/pitcher thing with rubberized feet at a nearby department store for a few Euro, and it’s perfect for making mayo with our stick blender’s whisk attachment. You can use a normal-shaped bowl too (we’ve done it, it works), but this beakery pitcher thing seems to make the process more efficient. 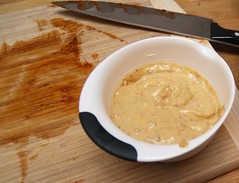 Combine the yolk and mustard with the whisk. Slowly drizzle in the oil in a thin stream until it thickens while you’re whipping, and it’s done when the the stuff looks like mayonnaise. Then thoroughly combine in the flavors and acids, and you’re done.

We like that this recipe makes about a cup of final product; perfect for the two of us with left-over chicken/turkey/whatever to turn into a couple days’ worth of sandwiches.

This less an actual recipe than a logical thought progression. It blew up on the internet a couple of months ago and we finally almost emptied a mustard to give it a try. Your jar needs to have a tight-fitting lid because you just shake it up in there. And it calls for Dijon mustard, but you can probably use whatever’s on hand – just adjust salt and sugar accordingly.

Put all ingredients in jar, screw on lid and shake until emulsified. Taste and adjust spices.

Here’s an example of how to adjust the method: we had honey Dijon, so I omitted the sugar. I also used sherry vinegar. Other good herbs with mustard include tarragon or rosemary.

Cheesecake in Germany is different. It’s good, but it’s far lighter and crumblier than American cheesecake, with nowhere near the tangy flavor I expect. I’ve tried to make cheesecake over here before, but it never quite works out correctly. The flavor is always somewhat lacking and the texture is a little off. I’m certain it has to do with availability of ingredients. The cream cheese here is all spreadable – they don’t seem to have the big, dense blocks of Philly, wrapped in foil, that have to sit out and soften on the counter before you can put it in the mixer. Even if I could get the blocks (and I probably could – I have ways), I really don’t have the fridge space to store it.

While planning Thanksgiving desserts with our friends, we decided a cheesecake might be in order (counterpoint to the omnipresent pies). So I started my usual recipe search, when I had an idea; look for a German-language recipe for ‘American’ cheesecake! I found a winner here. The original recipe is in German with metric measurements, but here’s my translation.

Mix the crushed cookies and melted butter together in a bowl, until all the crumbs are evenly moistened and are starting to clump. Press the crumbs into the bottom of a 24-26 cm. springform pan until they make an even layer.

In a large mixer bowl, combine all the filling ingredients and beat until smooth and light. Pour into the springform and bake for at 40 minutes or until the center is somewhat jiggly, but no longer liquidy. I prefer to bake mine a little longer, until the top is no longer shiny – but this will probably cause your cake to crack. Allow cake to cool to room temperature, then chill for at least 4 hours, preferably overnight.

The topping is optional, but I like my cheesecake with cherries. Into a small saucepan, drain your cherry juice and set cherries aside for now. Put 4-5 T of the cherry juice in a small glass or measuring cup and add the cornstarch, stirring well. Bring the juice in the saucepan to a boil, then add the cornstarch slurry while stirring. The mixture will immediately thicken. Remove it from the heat, stir in the cherries and serve with the cheesecake. I was wondering what vegetarians bring to Thanksgiving dinner potlucks. My favorite vegetarian over at zurika.com said “roasted sprouts.” I was intrigued — at first I was thinking alfalfa or mung bean sprouts or something. When she clarified that she meant Brussels, I was inspired, having previously only had them steamed. Maybe that’s because I’ve only been eating them since I turned 32 or so … perhaps I was bound to discover the roasted method sooner or later.

I googled around and found the Barefoot Contessa’s version. Some other versions I found called for chiffonading or discarding (!) the outer layer of leafy sprouty goodness.

In the end, I opted for B.C.’s ingredients, but with an 8″ square glass baking dish to prevent any escapees from rolling off her recommended sheet pan during the shaking episodes.

Cut off the sproutbutts and pull off any yellow outer leaves. Cut each sprout in half; we’re going for maximum surface area here. Don’t discard any nice green leaves which loosen up and fall off in the process — you will thank me later. Mix them in a bowl with the olive oil, salt and pepper. Pour them into a glass baking dish and roast for 35 to 40 minutes, until crisp on the outside and tender on the inside. Shaking the pan from time to time to brown the sprouts evenly was too risky for me, so I stirred them a few times over the course of the roast time. The loose leaves brown up and look a little weird, but they have a lovely crispiness to them. (You’re welcome!)

They were mighty tasty, hot and fresh out of the oven, but I thought they needed just a little something extra. I threw a little Herbes de Provence in garlic butter leftover from a previous variation on a garlic bread theme on there. Then they were perfect.