Nearly a wholesale lift from this recipe, my version contains about half the ground black pepper compared to the original. Love that site for inspiration! Even with 25% extra pork fat added into the mix, these dry out quickly if you let them go too long on the grill. END_OF_DOCUMENT_TOKEN_TO_BE_REPLACED

We got inspired by thespicysausage.com’s impressive array of recipes and had better-than-expected results with the first two attempts. We particularly liked the Sicilian one with the hint of nutmeg and lemon zest contrasting nicely with the underlying tangy bitterness from the red wine. But it distinctly lacked fennel, and also seemed unnecessarily salty (perhaps owing to the real Romano cheese we used this time instead of faking it with Grana Padano, like we usually do). 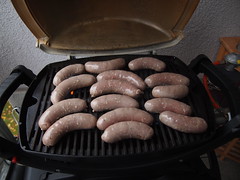 While whipping up another batch this morning, Sarah hit upon the idea of throwing in some fennel, too. Here’s our recipe, adapted from thespicysausage.com and scaled down.

Get your butcher to separate the skin from your pork shoulder, but make sure to retain the fat!. Ask for a coarse grind, or take it home and skin it and grind it yourself if your butcher won’t do it for you (for whatever reason…and then seek out a new (old!) butcher).

Keep everything as cold as possible: the bowl, the meat, and the utensils you will use to mix the ingredients. You might find it helpful to mix all the dry ingredients and lemon zest together first in small bowl and then introduce that into the cold pork mass. Really mix it in there well: an uneven distribution means some diners get flavor bursts and others are bored. Fry up a golf-ball-sized lump to check for taste. 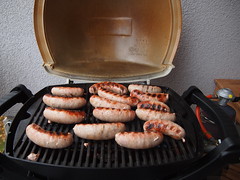 Then, make patties or fill up your hog casing, grill or fry, and enjoy. We knew in advance what shape of bread we’d serve them with, so we sized the links accordingly. For 13 adults, these 15 links were just barely enough. Next time we plan to make a little extra to freeze for later, too.

A few months back, we decided to take the plunge and buy the KitchenAid stand mixer over which we’ve been salivating for years now. There was a good sale at Amazon and we could get it with the European plug, so the timing was right. Plus, we were able to buy the meat grinding attachment & sausage-filling horn from the U.S. for quite a bit cheaper than it would have been here. Then a couple of months later, after much searching, I found a place that would sell us casings in a relatively small package.

With all of these tasks accomplished, there was only one part left: the actual making of the sausage. 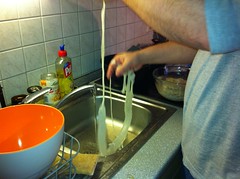 The ‘small’ package of casings contained about 20 meters (60 feet!). It might not seem like much for a butcher shop, but for a private citizen with very limited refrigeration facilities, that’s nearly too much to contemplate. Because I wasn’t too bright about it (or in shock at having purchased so much pig intestine), I chucked the whole mess in the freezer when I got it home. Therefore, we had to defrost the entire amount in order to get any off of the wad. So we’ll need to make more in a couple of days, or else forfeit everything we haven’t yet filled (i.e., a LOT). Next time, we’ll divide up the pack before freezing. No reason one package shouldn’t yield a year’s worth of meat-candy. 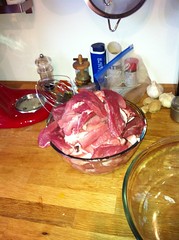 After getting the salt-preserved casings soaked, pliable and rinsed, it was time to grind and season the meat. We bought about 3.5 kilos of pork (not shoulder like we were instructed – there was none to be had, so we went with thigh cuts), Cliff trimmed the skin and cut it all into grinder-friendly strips, and we ended up with an impressive heap o’ meat.

Next, we divided the ground meat into halves and commenced seasoning. One was destined for Sicilian style sausage and the other for Spanish chorizo. The filling was a bit of an adventure, as I was in charge of filling the meat tray and Cliff was handling the casing. That might not have been the smartest division of labor, as I could have really used his eight inch height advantage to actually see what I was doing. Although, you can see that we worked through it and it turned out pretty well.

After the success of the breakfast sausage patties, I wanted to see if I could make some hot Italian sausage at home too.

But not with the recipe I used as a basis. Even with the suggestion to add fennel and red pepper flakes, the ratios there were terribly weak.

So here’s my suggestion:

Note the pinches — nothing more exact than that. I mix the stuff up in a bowl with my best guess, then fry up a silver-dollar-sized patty to check for taste and re-season if necessary. The end result is lovely in a meat-sauce — we’ve proven that tonight. I’m excited to try this out as a pizza topping (I’m looking at you, Matthias) or in a lasagna.

I had a hankering for some breakfast sausage patties recently. Checked with Mom via Skype and she said it would be easy to make ourselves. She was right. I cobbled the below recipe from stuff I found by googling and trial-and-error.

This is not an exact science, so mess with the proportions according to your taste. I like it sagey and peppery (both red and black) and this recipe reflects that. Actually, I forgot the cloves in this trial run of the recipe, and they were great without it, but I’m putting them in next time for sure. And we didn’t have dried sage, but oddly enough, we did have ground sage, which worked fine.

Mix all that stuff up together in a bowl. Some advice I read said to mix the stuff together by hand; some said that the body heat from your hands will negatively impact the texture of the meat. I opted to distribute the herbs and spices throughout the meat by using a thin wooden spatula with sort of a chopping motion. Seems to have worked. I got 4 hamburger-sized patties out of that recipe.